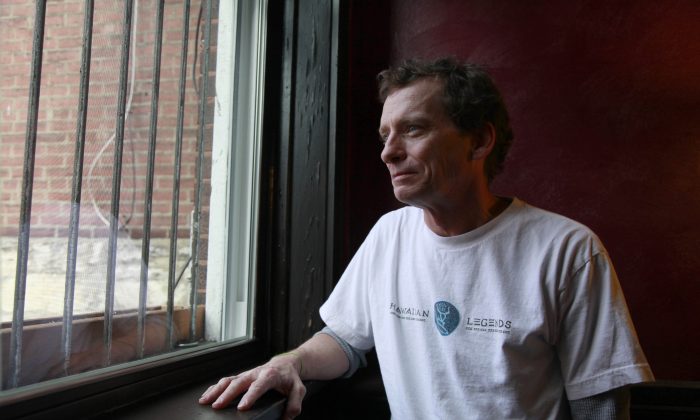 Matt Quain, a victim of blacks playing the "knockout king," also known as "knockout" and the "knockout game," in December 2011 in St. Louis. The youths that attacked Quain were arrested and charged but later set free after a 15-year-old witness failed to show up to court. (AP Photo/Jeff Roberson)
US

Knockout Game: Are Perpetrators Mostly Black People? And How Far Does it Go Back?

The “knockout game” or variations of the disturbing trend goes back to at least 1992, research by Epoch Times shows. The investigation included exploring claims on conservative blogs and media outlets regarding black on white racism, or that blacks are mostly perpetrating the vicious game and white people are the victims.

Epoch Times analyzed 37 incidents that span from September 18, 1992 through November 24, 2013 using news reports and information from local governments. The analysis shows that the knockout game—where people try to knockout a random person with one punch—stretches back much further and was more widespread than previously thought.

The research also points to many of knockout game perpetrators being black.

In 18 of the researched incidents, black people were confirmed as the perpetrators. Many were arrested and charged with crimes, and some of those were sentenced to time in jail.

In another 15 of the incidents, race wasn’t given, and there are no photographs available of the accused assailants. In some of these cases, the suspects were never caught.

In the other four incidents, race was given and the perpetrator or perpetrators were white, Hispanic, and/or Indian.

Additionally, out of about 10 incidents reported on by the Riverfront Times in St. Louis in 2011—the story won an award from the National Association of Black Journalists—all of the “players” were black and all but two of the victims were white.

Race and Gender of Victims

In the 37 incidents analyzed by Epoch Times, 15 of the victims were confirmed white.

Another 18 victims were not identified by race.

The other victims were: one Asian, one Middle Eastern, one black, and one Hispanic.

The victims were overwhelmingly male, as were the perpetrators (in all but one case).

‘Game’ Goes Back Much Further Than Thought

Characteristics of the “knockout game” include:

– The assailant traveling in a group, with other people perhaps video taping the attack and others also jumping in on the beating

– The absence of robbery

While these three characteristics are true most of the time, in several instances a robbery has followed the attack.

As early as 1992, the game was named as the reason for an attack on an unsuspecting victim. Yngve Raustein, a 21-year-old aeronautics major from Norway at M.I.T., was slugged by a group of three teenagers who decided to play a game the police called “knockout,” reported the New York Times.

“In the game, the police said, teenagers get drunk and challenge each other to knock out someone else with a single punch. If one fails, the others try it on that one.”

Raustein ended up dead after getting stabbed.

The game next appeared prominently in the United Kingdom, labeled as “happy slap.” The vicious attacks are pretty much the opposite of the description, no slapping involved. A bartender died from getting attacked by a group of six in London in October 2004. Two white teenagers and two black young men, aged 17 and 21, were sentenced to 12 years in jail after a jury convicted them of manslaughter. At least four other deaths in Europe were attributed to the sick game, and laws were drawn up in France and other countries to try to combat the crazed trend.

In in six-month period in 2006, 200 such attacks were recorded by police in London, reported ABC.

17 years after the death of the M.I.T. student, the “knockout game” turned up in Missouri and Illinois, labeled “point ’em out, knock ’em out” and “knock out king.”

In January 2011, a unidentified 25-year-old man was knocked out in Jersey City, and four boys aged 12 to 15 were charged.

In April 2011, one of the more widely reported cases took place, where Hoang Nguyen, 72, a retired schoolteacher and painter, was slugged on the way back home after grocery shopping. Elex Murphy, a 20-year-old black man, was sentenced to life in prison.

There were also attacks in 2011. In Chicago, a homeless man was punched at a train station; in Madison, Wisconsin, 30 incidents were reported from April through July alone; in Richmond Heights, Missouri, a 22-year-old hairstylist was knocked unconscious by a group of five teenagers; and in St. Louis, Missouri, 52-year-old Matt Quain was beaten and suffered a broken jaw and cracked skull. His attackers were arrested, but went free after a 13-year-old witness failed to show up to court. One of the attackers died two years later during an attempted robbery where he was shot by the homeowner.

The spate of attacks attributed to the vicious knockout challenge picked up again in 2013. A 51-year-old man was killed by a 13-year-old and 15-year-old in Syracuse, New York. A 70-year-old man was killed in September, also in Syracuse. Two older men were attacked in Lower Merion, Pennsylvania. A string of attacks happened starting on November 6 against Jewish persons in Brooklyn. They often faced black assailants.

Two attacks were reported in Washington, D.C. A man was beaten in Philadelphia. A Yale University researcher was attacked in New Haven, Connecticut. A woman believes her husband was a victim of the “game” in San Diego. And over 30 teenagers were terrorizing residents in Milwaukee on November 23, after challenging each other to the so-called “point ’em out, knock ’em out.”

Analysts have different opinions on what the “knockout game” signifies and what it means.

Thomas Sowell, a senior fellow at the Hoover Institution at Stanford University, wrote in the New York Post, “Many aspects of these crimes are extremely painful to think about, including the fact that responsible authorities in New York seem to have been caught by surprise, even though this knockout game has been played for years by young black gangs in other cities and other states, against people besides Jews—the victims being either whites in general or people of Asian ancestry.”

Sowell adds: “The main reason for many people’s surprise is that the mainstream media have usually suppressed news about the knockout game or about other and larger forms of similar orchestrated racial violence in dozens of cities in every region of the country. Sometimes, the attacks are reported, but only as isolated attacks by unspecified ‘teens’ or ‘young people’ against unspecified victims, without any reference to the racial makeup of the attackers or the victims — and with no mention of racial epithets by the young hoodlums exulting in their own ‘achievement.’

“Despite such pious phrases as ‘troubled youths,’ the attackers are often in a merry, festive mood. In a sustained mass attack in Milwaukee, going far beyond the dimensions of a passing knockout game, the attackers were laughing and eating chips, as if it were a picnic. One of them observed casually, ‘White girl bleed a lot.'”

At the same time, Degraff said that he believes the youth know right from wrong. “They are angry. They are alienated, and like other alienated youth, they are acting out.”

Retired NYPD detective Bo Dietl said on O’Reilly that he believes that the fact that many of the attackers are black and many of the victims are white is being suppressed “by the liberal news media.”

“It is a race-based thing—black youth against the white individuals,” he said. “Not even against the men, it is against women, defenseless people. They hit them in the face and try to knock them out. My problem is, they have to take this crime and characterize it the way it is supposed to be characterized … It is black on white crime, that is racism.”

Jeffrey Butts, a psychologist specializing in juvenile delinquency at the John Jay College of Criminal Justice, told AP, “It’s hard to excuse this behavior, there’s no purpose to this.”

“When someone runs into a store and demands money, you can sort of understand why they’re doing it, desperation, whatever,” Butts said. “But just hitting someone for the sheer thrill of seeing if you can knock someone out is just childish.”

“As a society, we must ask ourselves why so many young people think it’s acceptable to get a thrill violently attacking an unsuspecting victim, especially an elderly person. We also must take media and social media sites to task for promoting videos that glamorize this type of violence and encourage copy cats,” he said. “All of these attacks apparently have one thing in common: unprovoked violence.  It is a national concern when our youth have made spontaneous and unprovoked assaults on the adults and elders who live in our communities.”

Williams encouraged communities impacted by the violence in New York to include mental health experts as well as youth and job programs.

“As we know, without intervention, troubled young people can turn into violent adults,” he said. “We have the resources to seriously combat these problems, and we must focus and support all aspects of the solution. “

Paul Boxer, a psychology professor at Rutgers University who studies aggressive behavior, said it’s more about doing something new than hurting someone.

“You’ve got some impressionable kids, already with a propensity for violence who could be affected by this,” he said. “But not because they are hoping to hurt somebody, it’s more about risk taking, and new, different and exciting ways of getting into trouble.”

In the Riverfront Times award-winning feature, multiple “players” of the “game” spoke out about the allure.

One man, using the pseudonym Jason, said that he was introduced to “knockout king” in his middle school years.

“It was just a little game,” he added. “We used to walk to where a lot of people be at and hit ’em. If one of the homeboys didn’t knock him out, then the other would come. Whoever knock him out would be king.”

One teenager said that 10 to 15 percent of kids in the city engaged in “knockout king,” while another, Brandon Demond, said that “everybody plays.”

“It’s a game for groups of teens to see who can hit a person the hardest,” said Demond, then-18 years old, standing with a group of friends on Grand Boulevard as a police officer listened nearby. “It’s a bunch of stupid-ass little dudes in a group, like we are now. See this dude walkin’ up behind me?” — Demond gestured to a man walking toward him on the sidewalk — “We could just knock him out right now.”

Demond, who interviewed said he didn’t play in “knockout king” anymore, said that engaging in it proved his manhood.

St. Louis Circuit Attorney Jennifer Joyce said on December 1, 2011 that she had recently talked to a teenager who was arrested on a gun charge.

“Have you been scratching your head trying to understand what makes someone assault a total stranger for sport? Me too. For what it’s worth, we got some insight recently from a teen who was arrested on a gun charge,” she wrote on Facebook.

The teen bragged about knocking out over 300 people. When asked why, the teen said he did it “to get respect.”

Ike, a 27-year-old New Yorker, told Business Insider that he remembers the “game” from when he was 11. “I’ve seen white kids do it, black kids, Spanish kids,” he said.

“A friend of mine was the victim of it years ago. He was walking in Washington Heights and a group of kids just came up to him and one punched him in the face and ran off. They broke bones in his face.”

While it isn’t a new game, Ike says it’s deserving of attention.