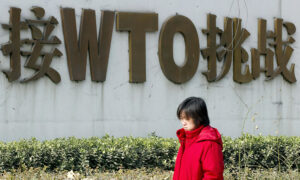 China’s urban management officers, called chengguan in Chinese, are a martial urban force tasked with enforcing municipal ordinances. They have landed themselves a reputation for brusque, uncivilized behavior and using excessive, sometimes deadly force against those unlucky enough to cross paths with them: typically the homeless and street vendors.

Thus, when a 90-second video was posted to social media, showing a heavyset vendor in Zhengzhou, Henan Province, opposing a group of chengguan on April 19, it was shared widely, and enthusiastically commented on.

In the video, the man, accused of taking up space on a sidewalk as reported by the Dahe Daily, takes off his shirt in a group of chengguan, revealing a prominent beer belly with a massive scar. He is cursing all the while. His name was not given in the video or the report.

About 20 minutes into the confrontation, during which the street vendor reportedly threatened to chop off officer Wang Guoqiang’s head, actual police officers arrived and resolved the incident.

“I felt terribly wronged at the time,” Wang said, “but as an enforcement official, I must control my emotions and will not fight back when beaten or slandered,” Dahe Daily, a state-run provincial publication, reported.

While the report pitched the chengguan officers as the frightened and intimidated victims, the video shows the street vendor closely surrounded by several officers, and online support for the man was overwhelming. Users vented frustrations that many Chinese have had when facing the whims of the chengguan, or expressed satisfaction that they had finally met their match.

“When confronted with the elderly, women, and the well-behaved, it is very rare to see that you have this high level of awareness,” an accusatory remark goes.

“Even the chengguan can be reasonable once you confront them with knives!” another comment reads.

“As enforcement personnel, you guys usually just use your fists, why didn’t you do anything to this hardcore dude? Where’s the energy that you had when beating up old men selling peaches and aunties selling apples?”