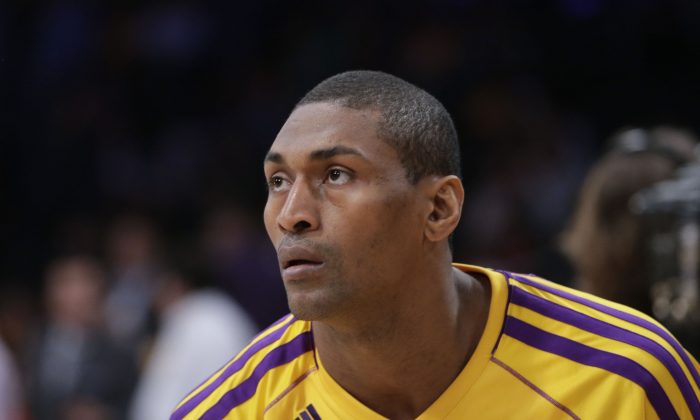 According to the New York Post’s Marc Berman, “The Knicks have discussed whether to extend a training-camp invitation to Metta World Peace on a mostly non-guaranteed deal.”

He added that World Peace, born Ron Artest, “is eager to reunite with his former Lakers coach, Phil Jackson, and his former Los Angeles teammate, coach Derek Fisher, and erase the bitter memory of his original homecoming.”

Last season, he asked to be released.

The report comes as the organization expects to see a “focused” JR Smith next season, according to ESPN.

Knicks general manager Steve Mills told ESPN: “I think we saw in the last month and a half of the season that J.R. was much more locked in as a playe. I think when you walked in the locker room you could see … that he was focused in a way that he wasn’t at the beginning of the season.”

Smith, who will make $5.9 million this season, has shown flashes of brilliance in his NBA career, but he’s been criticized as being too impulsive and careless.

Added Mills, “We have all the confidence in the world that [Smith] will come back and be focused and locked in the way he was at the tail end of the season.”

A league source told the network that the Knicks are taking a look at trading either Iman Shumpert or Smith.

“I believe that Derek [Fisher] will be able to communicate with him and get him focused on what he can do to make our team better,” Mills said, referring to Smith. He added that Smith should be able to “buy into the philosophy that we have and make himself a better player.”