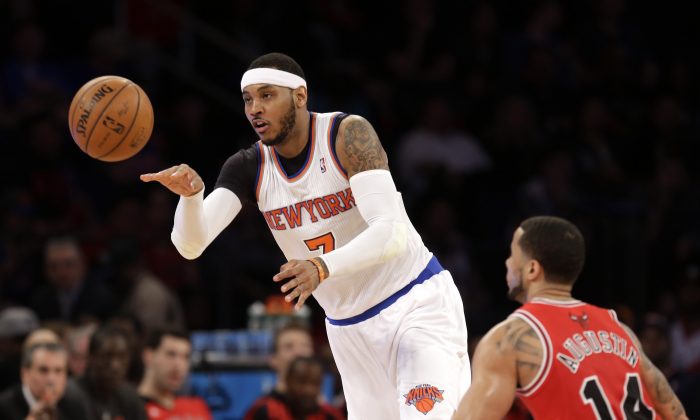 Carmelo Anthony is trying to decide between returning to the New York Knicks or going to the Los Angeles Lakers, according to the latest reports.

The Lakers are among a number of teams that are trying to woo Anthony after he opted out of contract with the Knicks.

Both teams have offered the star forward a maximum contract, although the Knicks are able to offer more money.

Anthony went on a cross-country visit to multiple teams in the last couple days, including the Houston Rockets, Dallas Mavericks, and Chicago Bulls.

But it appears that the real competition for Anthony is from the Lakers, which have stunningly jumped to the top of the race, according to ESPN.

“In a surprising twist, the Los Angeles Lakers have emerged as the team that most worries the New York Knicks in their attempt to re-sign superstar free-agent forward Carmelo Anthony, sources with knowledge of the situation told ESPN,” it reported.

“There was a growing sense circulating through the league Sunday that Anthony is likely to choose between the Knicks and the Lakers, who are the only two teams that can offer him max money without needing to make roster moves first. New York can offer him a five-year deal worth $129 million, while Los Angeles can offer a four-year deal valued at $97 million.”

A source told Marc Spears at Yahoo that Anthony is expected to make his decision earlier this week rather than later, while Marc Stein of ESPN says that it could come as early as today.

There were rumors that Anthony, Kobe Bryant, and Kevin Love were playing in a pickup game at UCLA on Sunday, according to the New York Post. Bryant is a key part of trying to get Anthony to join the Lakers.

Another rumor flying around is that Amare Stoudemire and Iman Shumpert may be dumped off to the Philadelphia 76ers.

The Sixers have a lot of cap space and are willing to absorb large contracts in return for more draft picks, as they are still in a rebuilding phase.

ESPN’s Stephen Smith said on First Take that the teams have had discussions about a trade.

The Knicks likely wouldn’t get much back while possibly sending a future first or second round pick to the team. Shumpert would also be a get in return for absorbing Stoudemire’s contract.