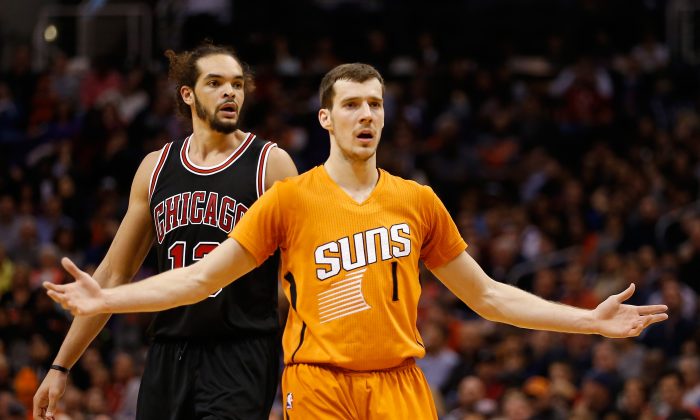 Goran Dragic #1 of the Phoenix Suns reacts during the NBA game against the Chicago Bulls at US Airways Center on January 30, 2015 in Phoenix, Arizona. The Suns defeated the Bulls 99-93. (Photo by Christian Petersen/Getty Images)
NBA

Phoenix Suns guard Goran Dragic has practically demanded to be traded, telling the organization that he will not re-sign with them.

In a stunning turn of events, Dragic informed Suns management on Tuesday through his representatives that he will go to another team once he hits unrestricted free agency this summer, practically forcing the Suns’ hand. Phoenix will need to deal Dragic now or else risk losing him in the offseason for nothing if he doesn’t change his mind.

USA Today reported, citing two people with knowledge of the situation, that Dragic’s reps informed the Suns of the situation in a meeting on Tuesday. General manager Ryan McDonough will now try to put together a move.

“The main issue, according to one of the people, is that Dragic wants to run his own team with the kind of freedom and support given to someone like Stephen Curry of the Golden State Warriors,” it reported, alluding to how Phoenix signed yet another point guard, Isaiah Thomas, in the offseason to add to Dragic and Eric Bledsoe.

“The decrease in production this season, as he sees it, is directly tied to the decrease in time spent as the lead-guard with the host of ballhandlers that surround him. Dragic is averaging 16.2 points, 3.6 rebounds, 4.1 assists and 33.4 minutes per game this season.”

Sources told multiple outlets that Dragic has given the Suns a short list of teams that are among his “preferred destination.” The Los Angeles Lakers, New York Knicks, and Miami Heat are among those teams, reported Yahoo, though none of the teams have particularly attractive assets.

The Lakers chief asset is rookie Julius Randle, but he’s been hurt since the first game this season and L.A. would likely be loathe to give him up, nor would it satisfy what Phoenix is looking for. The Lakers have few draft picks because they dealt one to the Suns in the previous Steve Nash deal. Ed Davis and Jordan Hill are among the players L.A. could offer, as well as Jeremy Lin’s expiring contract.

The Knicks have very little to offer, although the team could send a first-round pick or two over to Phoenix.

The Heat may be in the best situation since Luol Deng has been rumored to be on the block, as well as Norris Cole.

The Houston Rockets were expected to be one of the teams in competition of acquiring Dragic, but a source told USA Today that Houston is not on Dragic’s short list. Phoenix could ultimately opt to find a trade partner outside the list such as the Rockets, though.

The fact that Dragic’s position is now known publicly will likely mean that Phoenix will get less than it would have for him prior to the news. If a team acquires the star guard, they will be able to offer him a five-year max deal as they will hold his Bird rights.

“Phoenix could still decide to hold onto Dragic, knowing it can offer more years and money than anyone else in July free agency,” noted Yahoo.

“Or, the Suns could remain defiant of doing deals with those chosen teams, trade Dragic elsewhere and dare him to take less guaranteed years and money to join the Lakers, Knicks or Heat. If Dragic isn’t traded, he could sign a maximum free-agent deal for four years, $80 million with New York or Los Angeles. The Suns – or a team that acquires him and his Bird rights – could sign Dragic for five years, $100 million-plus.”