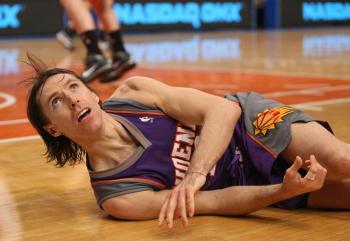 David Slays Goliath at the Garden

Dan Pomerleau
View profile
Follow
biggersmaller
Print
It was a match-up of David versus Goliath when the 3–14 New York Knicks hosted the 14–3 Phoenix Suns at Madison Square Garden on Tuesday night. And once again, David triumphed over Goliath as the Knicks easily downed the Suns 126–99 in the first meeting of the season between the two teams.

The Knicks were coming off Sunday's home loss to an equally intimidating team—the 14–4 Orlando Magic. It was the Knicks fifth loss in a row and it left them with the NBA’s third-worst record behind the 2–15 Minnesota Timberwolves and the winless New Jersey Nets.

The Suns on the other hand were coming off a four-game winning streak, the last win coming against the Toronto Raptors 113–94 on Sunday. Suns lead man Steve Nash had 20 points, 3 rebounds, and 16 assists in that game, a feat he nearly matched on Tuesday.

But the stars aligned for the Knicks this time around to set up a scoring frenzy that left the NBA’s top team searching for answers for four straight quarters.

Knicks small forward Danilo Gallinari had one of his strongest performances of the season shooting 10–19 for a game-high 27 points with 10 rebounds and 2 assists. He took an amazing 12 shots from deep, going 50 percent in three-pointers.

Gallinari was backed up by a total team effort that included double-digit scoring from six of the 11 players who saw minutes.

Both Harrington and Jeffries saw impressive playing time off the bench with nearly 50 minutes between the two of them.

The Suns saw some light from guards Nash and Jason Richardson (20 and 14 points respectively), but it wasn’t nearly enough to match the pace of the Knicks.

After tight play in the early minutes of the first quarter, Gallinari and Chandler let loose a string of threes and the Knicks closed with a nine-point lead.

The Suns hung tough in the second quarter, scoring 30 points to the Knicks’ 32, but the third quarter broke loose for the Knicks again and the Suns’ fourth quarter catch-up did little to make a dent.

Neither team had much in the way of foul trouble, and the Suns actually bettered the Knicks in free-throws, going 19–22 over the Knicks’ 13–19.

In addition to the Knicks’ rampant shooting (47–95), they also showed some good, scrappy defense that amounted to 50 rebounds, and 12 steals including four from Hughes and Lee.

Other interestng facts from the game were that this was the first game this season that the Suns failed to score more than 100 points and Knicks coach Mike D'Antoni coached against his former team. He was the coach of the Suns until May 2008 when he joined the Knicks.

Tuesday’s loss loosens the Suns' grip of their No. 1 standing in the West—a spot their Pacific Conference nemesis the Los Angeles Lakers are battling for.

In the mean time, let’s hope Tuesday’s magic rubs off for the Knicks against the Orlando Magic Wednesday night.

And no rest for the weary Suns. They square off against LeBron James’s Cavaliers (12–5) in Cleveland on Wednesday night.