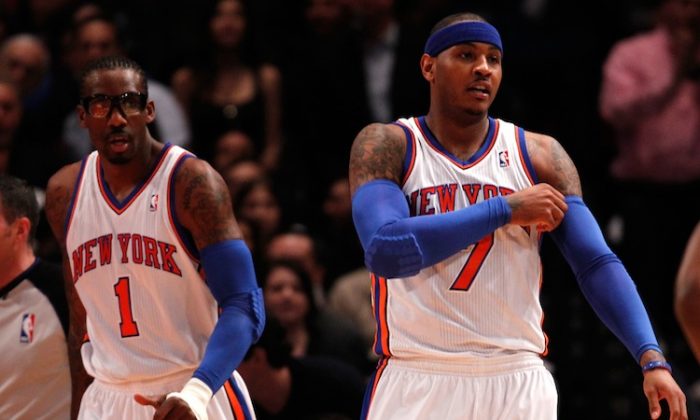 Anthony (R) and Stoudemire worked well together Sunday, scoring a combined 61 of the Knicks 89 points themselves. (Jeff Zelevansky/Getty Images)
NBA

Carmelo Anthony scored a game-high 41 points, including a final-minute three-pointer that put the Knicks in front for good, as New York staved off elimination in Game 4 Sunday with an 89–87 win at Madison Square Garden.

The three-pointer by Anthony was part of an exciting last two minutes of play.

After the two teams combined to miss their first 22 three-pointers of the game, three were hit in back-to-back-to-back possessions in the final 90 seconds.

First, veteran point guard Mike Bibby broke open an tie game (81–81) with a a three-pointer from the wing with 1:23 left to put the Knicks up three.

Bibby, who developed a reputation as a clutch playoff shooter some 10 years ago when he was with Sacramento, finished with six points on a pair of threes in 23 minutes of play. Bibby might not have gotten such an opportunity if it weren’t for the third-quarter injury to starting point guard Baron Davis.

Davis was leading a fast break, at the time, when all of a sudden his knee buckled; he fell to the floor in obvious pain and had to be removed on a stretcher. The injury has been described as a right kneecap dislocation. His availability for the rest of the series is unknown.

The Heat, who took a timeout following Bibby’s three, immediately ran a play to free up LeBron James who connected for a three-pointer himself to tie the game up at 84 with 1:15 remaining.

Following James’ game-tying three, Anthony took over for the Knicks hitting a three at the top of the circle to put New York up three again. Then after a Miami turnover Anthony ran down the shot clock before drawing a foul on a three-point attempt.

Inexplicably though, Anthony missed two of the three free throws that could have iced the game.

With the Knicks up 88–84, the Heat’s LeBron James drove to the hoop and made an acrobatic layup that went just over the outstretched arms of Tyson Chandler, who was called for his sixth foul on the play.

After James hit his free throw to pull the Heat within one point, Miami purposely fouled Knicks forward Amar’e Stoudemire with 14 ticks remaining.

After Stoudemire hit one of two free throws the Heat had one last chance but Dwayne Wade’s desperation three-point attempt at the buzzer fell short.

On the other side, a determined Stoudemire finished with 20 points and a team-best 10 rebounds in 34 minutes of play with a cast on his badly cut left hand. Stoudemire, who missed Game 3 with the accidental self-inflicted injury finally looked comfortable playing with fellow star forward Carmelo Anthony as both players made more shots than they missed while flowing with the offense.

Game 5 of this best-of-seven series will be Wednesday night Miami.