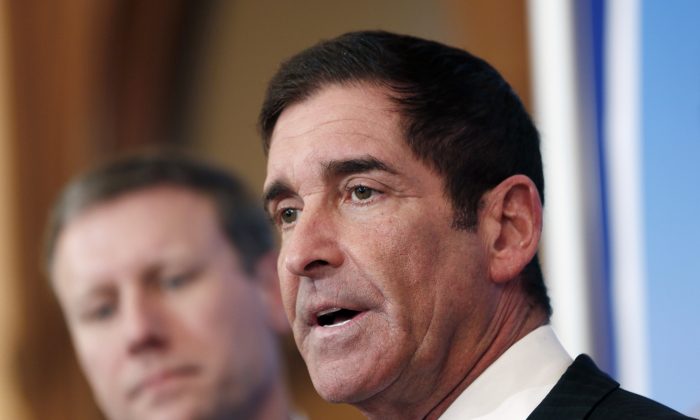 Klein plans to continue his current work, including pushing for paid family leave, raising the minimum wage, and passing the state DREAM Act.

“We gotta keep doing what we’re doing,” said Klein. “Putting more money back in the pockets of hardworking New Yorkers, helping our senior citizens, enhancing our education opportunities, it’s really what we’ve been doing over the last four years.”

Koppell, 73, came out of retirement to challenge the incumbent Klein. Koppell served before as attorney general in 1994, and as a member of the State Assembly for 24 years.

Koppell said he returned to challenge Klein because the latter caucuses with the Republicans and is no true Democrat.

Klein, one of the most powerful politicians in New York, heads the five-member Independent Democratic Conference (IDC). Klein argues that his actions have helped break the partisan gridlock in Albany and get bills to a floor vote.

“The IDC has proven that we can govern. I don’t think anybody wants to go back to the bad old days when Albany was dysfunctional, where we couldn’t get anything. The only thing we were known for was scandal,” said Klein.

In June, the IDC promised to align with other Democrats after coming under fire for the power-sharing arrangement.

“It’s because I was running that that happened,” said Koppell, adding that Klein became worried about losing the support of the mayor, governor, and unions in the primary. “So he said, ‘Oh no, no, no, I’m not going to join the Republicans.” But I really don’t think we can trust him. And he’s keeping the IDC alive.”

Klein retorted, “I don’t know when he’ll ever have the power to eliminate anybody.”

Both candidates were present at Riverdale Academy Tuesday afternoon, greeting voters at what Klein described as probably the largest voter’s booth in the New York Senate district.

“I think most of the voters I’ve encountered here have been friendly and seem to be favorable but you never know until they open the ballot box,” Koppell said.

For the last day of campaigning, Koppell chose to stand guard in Riverdale while Klein ran all over the district, including visits to Throgs Neck and Pelham Parkway.

“I planned to be here, because if you go to a lot of different places, you spend a lot of time traveling and not seeing the voters,” said Koppell about his campaign strategy for the day.

At 5 p.m. Tuesday, however, the candidates were standing only a few feet from each other.

One man commented on Twitter that he had just walked by both candidates while entering his vote. “Awkward,” he tweeted.