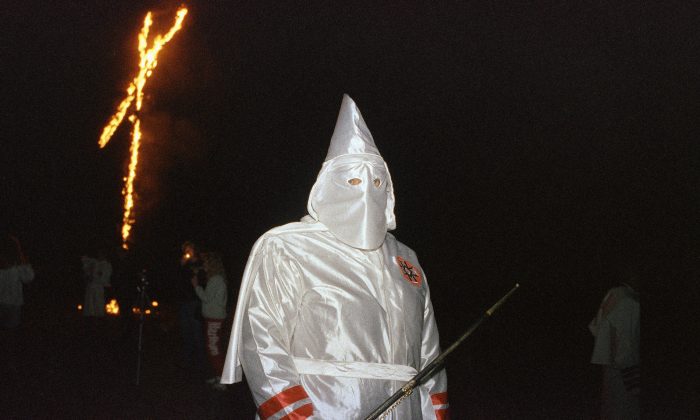 A Ku Klux Klan in a file photo. (AP Photo/Danny Johnston)
US

Georgia’s Supreme Court dismissed an appeal on a technicality on July 5, giving a win to a Ku Klux Klan group that had been denied participation in a highway cleanup program.

For years, the KKK group, International Keystone Knights of the Ku Klux Klan, had been trying to enter Georgia’s Adopt-A-Highway program, which allows volunteers to pick up litter on roads, in this case on State Route 515, in exchange for sponsorship signs with the volunteer group’s name.

The group applied to participate in May 2012 and adopt a one-mile stretch of the highway.

A month later, the state’s Department of Transportation denied the KKK group’s application citing “long-rooted history of civil disturbance would cause a significant public concern,” as well as impacting “safety of the traveling public, potential social unrest, driver distraction, or interference with the flow of traffic,” according to court documents.

Georgia’s Supreme Court shot down an appeal by the Department of Transportation. A lower court had decided the agency violated the KKK group’s free speech rights when it denied its application.

“The denial was premised as well upon a consideration of the peculiar character of the applicant, particularly the violent and subversive history that comes so readily to mind when one thinks of the Ku Klux Klan and its affiliates,” the ruling said.

The Department of Transportation filed its appeal incorrectly, however, leaving the state’s Supreme Court without authority to consider its claims.

The American Civil Liberties Union Foundation (ACLU) filed a lawsuit on behalf of the KKK group back in 2012, claiming that the state had violated the group’s freedom of speech rights.

“Many people may find the views expressed by groups like the IKKK abhorrent. But there is nothing American about taking away the right to express those views or undertake a project, such as notification of sponsorship of a highway cleanup, which is otherwise open to all,” said Chara Fisher Jackson, legal director of the ACLU Foundation of Georgia in 2012.

“Freedom of speech is at the very core of American values,” added Jackson.

It is not clear what will happen next with the case.