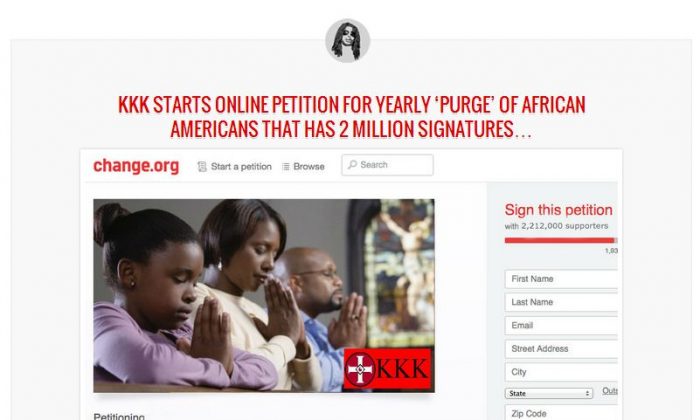 An article saying the Ku Klux Klan started an online petition via Change.org for a “yearly purge" of black people is fake.
Social Media

An article saying the Ku Klux Klan started an online petition via Change.org for a “yearly purge of African-Americans” is fake.

The bogus article, published on “satire” website Cream Bmp Daily, had a few thousand shares on Facebook as of Wednesday. It claimed the KKK petition has 2 million signatures. It goes on to say, “Producers of the movie ‘The Purge’ deeply apologize for what their movie has caused and claim you will not find their signature anywhere on the petition, but a quick scan of the petition revealed at least five of their relatives agree with purging on African Americans.”

According to a disclaimer, the website posts fake stories for satire purposes and shouldn’t be taken seriously.

Another disclaimer elaborates: “All reports and other information on this page may or may not be 100% accurate. It’s not news, it’s entertainment. All other comments are my personal opinion, but try not to take the [expletive] seriously and come at me … because I will and do sue. I’m just a young [expletive] tryna get rich. I do not take credit for any media featured on this site. All featured media is the property of its respected owners or whoever submits it to CreamBmp.com.”

On social media websites, a number of people apparently believed the KKK article.

“The KKK really started a petition online for a purge that already has 2thousand signatures. That’s scary,” one person tweeted Wednesday.

Said another, “Kkk starts online petition for purge on African Americans,can’t even fathom how you can hate an entire race this much.”

Added another: “Kkk really gotta petition to purge black people? cause it aint 1930 and it’s way more of us than them so…..wussup.”

Another fake article on Cream BMP, which got about 100,000 shares on Facebook, claimed a group of teens killed more than 100 people in Chicago to imitate “The Purge” sequel that came out about a week ago.