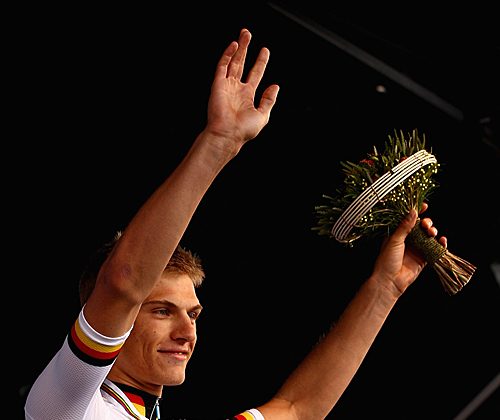 Stage Two of the Dreidsaaage de Panne ended, as expected, in a bunch sprint, but none of the favorites took the win.

Instead, Marcel Kittel of 1T4I came from three lengths back to beat Katusha’s Alexander Kristoff to the line by a bike-length. Third was Boy van Poppel of U.S. team United Healthcare. The best-placed of the favorites was Lotto’s André Greipel, in fifth.

Stage Two, 216 km from Zottegem to Koksijde, had a few hills right in the middle but nothing that should have stopped the sprinters from controlling the end. Most of the stage passed through mostly flat countryside, where crosswinds could play a role.

The peloton suppressed any escapes for the first 50 k, when three riders—Andy Cappelle (Accent Jobs-Willems Verandas,) Brian Vandborg (Spidertech,) and Jonathan Breyne (Landbouwkrediet) got away. This trio opened a gap of over six minutes.

Crosswinds added a bit of drama to the middle of the race; twice the peloton was split as the leading teams took advantage of changing wind directions to accelerate away. Both times the second group pulled itself back.

Breyne and Vandborg burned out with 50 km to go. Cappelle pushed on alone into the town of Koksijde where the race ran three 12-km laps. Capelle was caught just after starting the final lap; then it was a battle of the sprinters’ teams.

The pace was too high—and perhaps everyone’s legs too tired after the long, fast stage—for any team to form a leadout train. Sylvain Chavanel (Omega Pharma-Quickstep) led a good distance, then FDJ-BigMat sent four riders to the front in an attempt to control the sprint. Katusha kept a pair of riders up front for a distance, and Lotto got one rider into the lead briefly, but Greipel and his train couldn’t form up behind him.

Katusha’s Alexander Kristoff kicked off the sprint a few hundred meters out, launching from behind a teammate. It looked like the Katusha rider might take the win, but Kittel came from fourth wheel in the final hundred meters to blow right past the competition. Kittle sat up to celebrate ten meters from the line and still won by a bike length.

Peter Sagan of Liquigas chose not defend the yellow jersey, dropping to the back with three km to go. He had told the press he was riding only for training, and apparently decided not to risk the bunch sprint.

Andy Cappelle was rewarded for his brave ride with the sprinter’s blue jersey; the Belgian rider won all the intermediate sprints. He also finished third in the King of the Mountains competition.

Wednesday hosts two stages; the first, a 112-km loop through the countryside around De Panne, is followed by an afternoon time trial. The first stage has a few small hills but nothing even remotely like a challenging climb; this will be another sprint finish. This time the sprinters should be fresh enough to fight it out at the end.

The 14.7 km time trial course is also perfectly flat, with several sharp bends a three U-turns; bike-handling and acceleration will be tested, but not climbing ability.