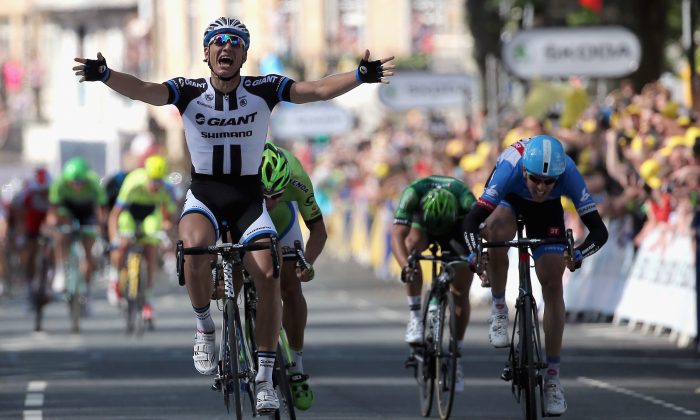 Marcel Kittel of Giant-Shimano celebrates his victory ahead of Peter Sagan of Cannondale in second place, Ramunas Navardauskas of Garmin-Sharp in third place and Bryan Coquard of Europcar in fourth place in Stage One of the 2014 Tour de France from Leeds to Harrogate on July 5, 2014 in Harrogate, United Kingdom. (Doug Pensinger/Getty Images)
Cycling

The 101st Tour de France cycling race started in Leeds England Saturday, with the first of three stages in England before the race heads across the Channel to finish up in France.

Saturday; start marked the 20th time “le Tour” kicked off on foreign soil, and the fourth time in the U.K.—in 1998 the first stage started in Dublin, Ireland, and in 2007, in London.

More than a million Englishmen and Tour tourists lined the road from Leeds to Harrogate to watch the 198 riders stream past, most of the Brits likely supporting Team Omega Pharma-Quickstep’s Mark Cavendish, former World and British champion and one of the top sprinters in the sport.

Though the 191-km stage contained three categorized climbs, none were long or steep enough to crack the sprinters; the stage looked to be a showdown between Giant-Shimano’s Marcel Kittel, and Cavendish, who has won 25 Tour stages but was beaten soundly by Kittel in the 100th edition.

For Mark Cavendish, the stage was of double importance: not only did he want to avenge his 2013 loss; Harrowgate was also his mother’s home town, and the British sprinter had spent a lto fo time there as a youth. Much of his family was out to watch him contest the finish.

The day started with 45 minutes of processional riding, passing the Prince of Wales and assorted royalty, before the flag waved signifying the start of competition.

Immediately three riders attacked: Nicolas Edet of Cofidis, Benoit Jarrier of Bretagne-Séché, and the irrepressible Jens Voigt, at 42 the oldest rider in the field, and still one of the most aggressive.

Voigt, riding for Trek, knew he had no chance to stay away; the sprinters’ teams would never allow it. What he could and did do was capture enough King of the Mountain points to win the first polka-dotted jersey.

Voigt led the young French pair (Edet is 26 and Jarrier is 25) up the day’s fianl Cat 3 climb, barley ahead of the peloton, and was swept up just past the crest with 59 km left in the stage. This will be the big German’s last Tour, and he made his mark, fittingly.

The rest of the stage was all preparation for the final few kilometers when the sprinters’ teams would go to work. Giant, Omega, Lotto-Belisol riding for André Greipel, and Cannondale, riding for Peter Sagan were the favorites

The pace picked up a good 15 km from the finish, as the sprinters’ teams battles the big General Classification teams for space at the front of the peloton; no one wanted to be left behind if there was a crash which split the field. Luckily there were no more than close calls, and the peloton hit the 5-K mark with Lotto, Giant, and Omega fighting for control.

Omega managed to establish its grip on the head of the peloton 4000 meters from the finish line, with six riders in a row; Giant tried to form up on the far right. This pair sparred for the next couple kilometers, with Omega keeping the upper hand.

Entering the final kilometer, Movistar’s Alejandro Valverde surprised everybody with a solo attack. The Spanish rider shot ahead, making the sprinters’ teams ignore each other to chase Valverde. He nearly made it but the undulating pavement approaching the line sapped enough speed that he was caught only 100 meters from the finish line.

Long before Valverde was caught the sprinting had started. With 400 meters left Cavendish and Kittle were side by side, both having received near-perfect leadouts, but Cavendish was trapped behind Peter Sagan, with Kittel on his right and Orica-GreenEdge rider Simon Gerrans on his right; Gerrans was pinned in place by Europcar’s Bryan Coquard.

Mark Cavendish was not willing to surrender the stage; he leaned hard to his left, head-butting Gerrans in the side. Gerrans pushed back, and Cavendish, off balance, slid under the Orica rider’s wheels. Cavendish flipped, Gerrans launched over him; both landed hard on the pavement.

While Cavendish and Gerrans bounced along the tarmac at 45 mph, Marcel Kittel was repeating his finish from 2013—outsprinting Peter Sagan to win the opening stage and the first leader’s yellow jersey of the Tour de France.

Mark Cavednsihs was able to struggle back onto his bike and limp across the line eventually, but the look on his face and the way he was nursing his right shoulder made it clear that the Englshman would not be contesting any more stages in from of his hometown fans.

“It was so hard! The hill in the last kilometer made it very difficult to win. There were so many people that we rode the finale like in a tunnel with a terrible noise,” Kittel said on letour.fr.

“It’s unbelievable that I win Stage One again. I had good legs today and my guys did an excellent job. Our plan was to control the race with the other sprinters’ teams. This yellow jersey is for my teammates. They were completely dedicated to that one goal. It’s a big, big relief to pay them back with a win.

“I knew from last year how hard it is to win at the Tour de France but I realized today how much harder it is to win stage 1 a second time. Tomorrow it’ll be another day with a lot of ups and downs, I’m not sure if we, the sprinters, can compete for the win again.”

“I feel sorry for Mark Cavendish and I wish him all the best.”

Mark Cavendish suffered a separated shoulder in the crash; he will not be able to continue in this year’s Tour. He spoke to Cyclingnews.com after the stage:

“We knew last night and I knew straight away because normally in crashes I bounce back straight away. This was the first time in my career that I knew something was up, but I wanted to finish and I was able to do that, but I was in pain,” he said.

“I had some optimism that the swelling would go down overnight but it’s not possible to start today. I’m absolutely devastated. The Tour is in the UK for another two days and secondly we have incredible team.”

“They rode incredibly yesterday and they will for the next 20 days and I wanted to be part of that success.”

“I spoke to Gerrans at the finish and then I called him at his hotel last night too. We both went for Sagan’s wheel but I wanted that gap so bad but it wasn’t there. I hope that Simon is okay and today is a stage for him. He’s a good guy and I m sorry.”

“I would have loved to have been here for three weeks as we have a really strong team here but the crash was my fault at the end of the day.”

Stage Two will decidedly not be a stage for the sprinters; with nine categorized climbs, it could well be the scene of the first real combat between the General Classification favorites.

Mark Cavendish of Omega Pharma-Quick-Step Cycling Team arrives at the finish line after crashing in the final kilometer of Stage One of the 2014 Tour de France from Leeds to Harrogate on July 5, 2014 in Harrogate, United Kingdom. (Doug Pensinger/Getty Images)