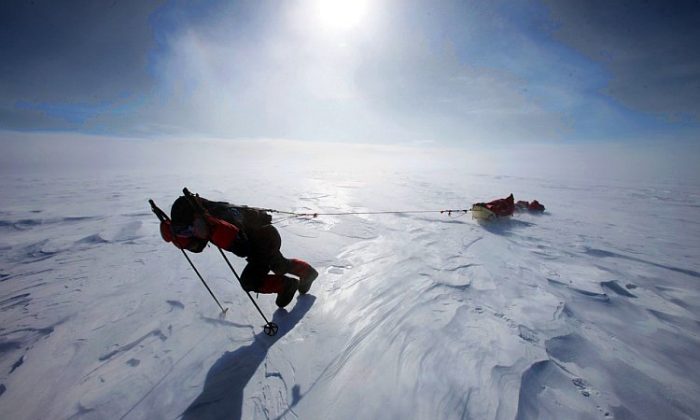 Sebastian Copeland pulls his double sleigh loaded with the 400 pounds of provisions he needs for his historic 81-day trek across the Antarctic. (Courtesy of Sebastian Copeland)
International

Kite Skiing Across Antarctica in 81 Days

The wind whisks Sebastian Copeland’s kite across the vacant, glistening field of white. He skis toward nothing except miles of pristine snow. He loses control of his 400-pound double sleigh, each going in a separate direction. One sleigh becomes trapped behind sastrugi—the Arctic’s version of sand dunes—while Copeland’s kite continues to zoom. He falls hard on sharp ice, breaking two ribs.

Enduring excruciating pain, Copeland thought of aborting the mission. On Nov. 2, 2011, he and partner Eric McNair-Landry set out for Antarctica, without any form of motorized transportation. In the months to come, they would not encounter any civilization for medical assistance, journeying to above 12,000 feet on the Antarctic plateau, photographing ice research for the Snow and Ice Data Center (NSIDC).

Over the course of the expedition, Copeland’s ribs healed “willy-nilly,” as he put it.
“There’s still some soreness that’s going to be with me for some time, but luckily I was able to carry on.”

The expedition was not only for ice research, but to commemorate the centennial of the first visits to the South Pole, by Roald Amundsen and Robert F. Scott, in 1911 and 1912, respectively.

To honor the event, Copeland and Landry embarked on a mission to link the pole of inaccessibility (POI) with the South Pole, creating a path no human has ever traveled. The POI is the farthest inland point from the coast in any direction.

Broken ribs were just one of many hardships Copeland suffered in those 81 days. To get to the high-elevation plateau, each man hauled 400 pounds of food and supplies uphill.

“It’s literally like pulling a house. Sometimes we’d only manage to do a couple of kilometers a day,” Copeland said. The men spent the first 20 days going up the glacier, pulling their houses. “That was not the highlight of our trip.”

Under daylight 24-hours per day, the pair lost track of night and day. They went to bed whenever the wind died, and rose when the tent ruffled. “You sleep with one eye open, all you rely on is the flutter of the wind,” Copeland said.

“You have to capitalize on every opportunity. You are always fighting the clock,” he said. “You only have so much food and fuel.”

At high elevations, the winds becomes “flukey” and the air starts to thin. “Your heart is working a lot harder [to take in oxygen]. Even bending down to tie your shoe laces can leave you out of breath,” Copeland said.

The sledge held for three months, acting as only “a bit of a nuisance” until the last three days of the expedition, when dangerous signs of stress appeared. Getting “notably worse” each day, the sledge “gave its last sigh, its last breath upon reaching Hercules Inlet” at the South Pole.

Arriving at their destination, there were “no parades, podium, or cash prizes. No cheering crowds or laurel wreaths.” But for Copeland and Landry, breaking three world records was more than enough.

Not only were they the first to link the POI and the South Pole, creating a 479-mile (880-km) route, they were also the first team in history to reach the POI from the eastern coast of Antarctica, without motorized transportation or outside help.

Copeland and Landry also broke the world record for the longest distance traveled on skis and kites.

In 2010, the duo skied for 24 hours in Greenland, crossing 370 miles (595 km) overnight. “It’s one of those silly records that only matters to explorers,” Copeland jokes modestly.

For over a decade, Copeland has been an international speaker on the climate crisis for various associations including the United Nations and the World Affairs Council. He dedicates his years to raising awareness of climate change and its effects in the Arctic—the purpose of his North Pole expedition in 2009. The journey was captured in his documentary, “Into the Cold: A Journey of the Soul.”

Although the Antarctica trip was action-packed and rigorous, in some ways, it was a relief compared to the Arctic. “In Antarctica you don’t have to worry about polar bears … they’re amazing predators,” Copeland said. “It’s nice to travel to Antarctica without thinking about that.”

This time around, Copeland said he spent more time inside his head. “You can paint in your own spiritual and idealistic reality. You can reflect on one’s character, areas to improve on—trying to see where you can become a better person.” While skiing across the white abyss, he said he was able to “let go of a lot of things, a lot of negativity.”

Copeland describes his voyage across the endless, white snow as “riding into a post-apocalyptic world.”

“You’re the only ones left. That may sound a little gloomy, but what it actually means is that it’s clean—everything is clean,” he said.