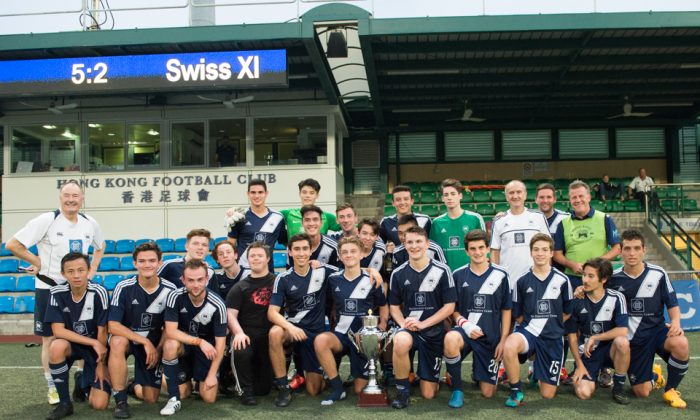 Colts celebrate winning the Yau Yee League Cup, securing the victory against Swiss Xi on penalties after the match had been level on 1-1 at the end of extra time. The match was played at Sports Road on Saturday May 6, 2017. (Bill Cox/Epoch Times))
HK Football

HONG KONG—This week saw the title decider between Kitchee and Easten Long Lions at Mong Kok Stadium on Saturday May 6, 2017.

After leading the table for most of the year, Eastern Long Lions were beaten 4-1 by chasers Kitchee who claimed the BOC Life HKFA Premier League title.

Kitchee extended their lead early in the second half when, in the 48th minute, Krisztian Vadocz headed in from Jared Lum’s corner kick. Although Eastern Long Lions pulled a gaol back in the 55th minute when Michel Lugo fired into the net from the left hand corner of the penalty box, Kitchee restored their 3 goal advantage in the 77th minute when Alessandro collected his hat trick by converting Fernando Pedreira’s cross after he had advanced down the left wing, to make the score 4-1, a lead that Kichee maintained until full time, to win the BOC Life HKFA Premier League title.

Sun Hei lead the first division with 66 points from 24 matches, with Wong Tai Sin second with 65 points from the same games.

Sparta Rotterdam Mutual lead the second division with 47 points from 21 matches, with Hoi King 2nd with 46 points, Central & Western third with 46 points, and Lucky Mile fourth on 44 points all from the same games.

Wing Go Fu Moon lead the third division table with 62 points from 24 matches, with Happy Valley second with 61 points from the same games.

Saturday (May 6) saw the Yau Yee League Cup Final take place between Colts and Swiss XI at HKFC’s Sports Road. After Swiss took an early lead, Colts eventually scored an equaliser to force the game into extra time which, despite chances at both ends, failed to produce a winner. Colts won the penalty shoot out to claim the trophy.

In the Chairman’s Cup, CSOB won the game 5-3 after having led 5-nil and subsequently conceding 3 goals to HKSS.