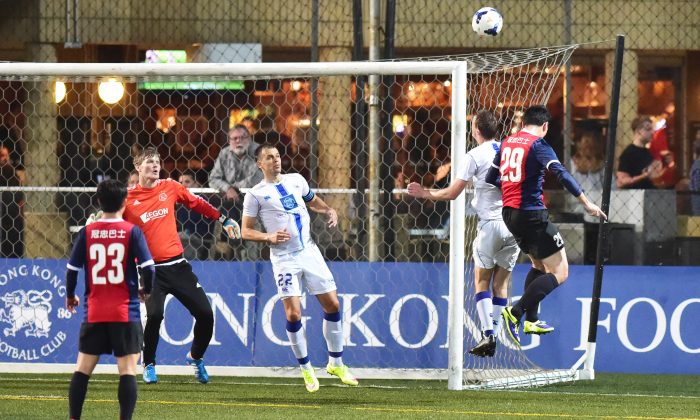 In the day’s other game at Mongkok Stadium, league leaders Kitchee took on contenders Sun Pegasus. Kitchee took the lead in the 16th minute when Jorge Tarres converted a penalty kick, for a lead which they held until the half time break.

Kitchee extended their lead in the 55th minute when Matthew Lam headed in Paulo Carreiro’s cross. Sun Pegasus reduced the deficit in the 61st minute when Admir Rascic converted Petrisor Voinea’s cross, but Kitchee held on for a 2-1 win.

In Sunday’s (March 8) game at Mongkok Stadium, South China took on Wong Tai Sin. South China took the lead in the 34th minute when they were awarded a penalty that was converted by Chan Siu-ki, a lead that they took into the half-time break.

South China doubled their lead in the 55th minute when Awal Mahama broke into the Wong Tai Sin half, where his cross was pushed out by goalkeeper Chung Ho-ting only for South China’s Evan Kostopoulos to fire home.

Wing Yee now head the second division after 16 matches with 41 points, Mutual are second with 34 points, Kowloon City are third with 32 points, and Sai Kung fourth with 29 points.

Tung Sing now lead the division with 47 points from 18 matches, with Central & Western District second with 44 points from the same number of matches.

In the early game at Sports Road, Corinthians took the lead in the 5th minute when, from a throw on the right-hand side, the ball was delivered into the box and fired into the bottom left-hand corner of the net by Seb D’Aulerio and held the lead until half time.

Wanderers equalised in the 49th minute when Simon Galvin crossed from the left edge of the box near the goal line, and Liam Kelly struck the ball firmly into the left-hand corner of the net. Corinthains re-took the lead in the 59th minute when the ball was knocked from the right-hand edge of the centre circle into Wanderers’ ‘D’ and nodded into the box for Adam Riley to finish past goalkeeper James Seddon. Wanderers equalised again in the 61st minute when a ball from Danny Beattie in the centre circle to the left edge of the ‘D’ was headed by Andrew Wylde towards the right-hand post where Neil Shonhard headed the ball into the back of the net. Despite chances, neither side could force a winner.

Albion still head the table on goal difference from KCC Dragons, with both sides on 39 points, whilst USRC are third with 37 points, and Wanderers are fourth with 36 points – all having played 18 games.

In the second division, GGFC were 3-nil victors over CSOB, WYFC06 were 4-1 winners against Interglobo Colloids, The Store House Hearts were beaten 1-nil against Antonhill, KCC Knights drew nil-all with SFALO Oxford, and HKU70’s won 5-nil against ANP.

HKDC Mobsters now lead the table after 18 games with 41 points, with HKU70’s second on 39 points.

University lead the table with 47 points from 18 games, with IES second with 45 points form the same number of games.

In the fourth division, Rising Sun won 1-nil against Youth Coaches, Power 22 drew 1-all against Hung Art, Outward Bound were 3-nil victors over HKSS, Bapcoll won 3-nil against Standard Chartered, Grasshoppers won 2-1 against Friends of Barclays, and Skyline were 3-1 winners against WYFC84.

HKSS and Power 22 are joint leaders with 42 points from 17 games, with Grasshoppers third with 38 points from the same number of matches.