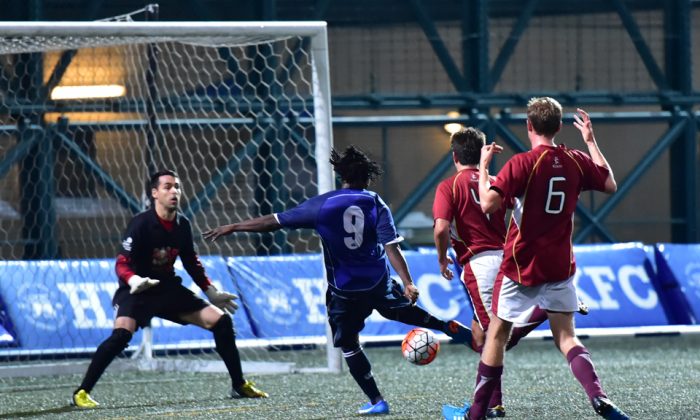 HONG KONG—Wednesday (Dec. 23) saw South China take on Kitchee at Mongkok Stadium in the last HKFA Premier League matches played before the start of the New Year, played in front of 3,630 spectators.

South China took the lead in the 12th minute when Chan Siu-ki scored after Kitchee’s defense failed to clear Cheung Kin-fong’s free kick. Kitchee qualised in the 20th minute when Paulo Carreira robbed a South China defender before advancing into the penalty area and fending off a couple of defenders before firing into the net. Kitchee took the lead in the 47th minute when Fernando Pedreira finished a rebound from close range after Alexander Akande’s header from Jorge Tarres’ cross had been blocked by South China goalkeeper Christian Mora for a 2-1 half time lead.

Kitchee extended their lead in the 87th minute when some good interplay fed through to Alessandro Ferreira who slotted home. Alexander Akande added a fourth for Kitchee before Carlos Viera pulled one back for South China, before the game finished with a 4-2 Kitchee win.

With a more even number of games played, Eastern now head the table with 16 points, South China are second on 15 points and Kitchee are third on 11 points all from 6-games.

In the semi finals of the Canbo Senior Shield, played at Mongkok Stadium on Saturday (Dec. 26) and Sunday (Dec. 27), 2 goals from James Ha ensured that Kwoon Chung Southern prevailed in an unexpected 2-1 defeat of champions Kitchee on Saturday whilst Eastern and South China fought out a 2-all draw in the Sunday game before the finalist was decided on a penalty shootout.

In Saturday’s game, Kwoon Chung Southern took the lead in the 33rd minute when James Ha finished from Michael Luk’s cross, and doubled their lead in the 49th minute when James Ha collected a long ball, ran into the box and fired home for a brace. Despite Kitchee pulling a goal back in injury time when Juan Belencoso scored with an overhead kick during a scramble in the penalty box, it was not enough to stop Kwoon Chung Southern taking their place in the Canbo Senior Shield final.

In Sunday’s game, South China took the lead in the 20th minute when Carlos Viera headed Awal Mahama’s cross into the far corner, a lead that they held until half time.

Eastern equalised in the 80th minute when Diego Moreira headed in Cheng King-ho’s cross which made the full time score 1-all, and forced 30 minutes of extra time. South China re-took the lead in the 93rd minute when Andrew Barisic unfortunately headed Sean Tse’s throw into his own net, but Barisic then redeemed himself when, in the 97th minute, he finished after Andy Naegelin nodded on Wing Chin-hing’s corner. Despite chances at both ends for the remainder of the match, neither side could find a winner. Eastern won the penalty shootout 4-3.

The final between Kwoon Chung Southern and Eastern will be played at Hong Kong Stadium on Sunday Jan 24,

In the Yau Yee League Cup third round, higher division teams generally prevailed against their lower division opponents, with Albion, USRC, Swiss XI, IES, The Store House Squadron, Antonhill, KCC Knights, and Wanderers progressing to the quarter finals where the first division teams will likely to be hoping to avoid each other in the draw.