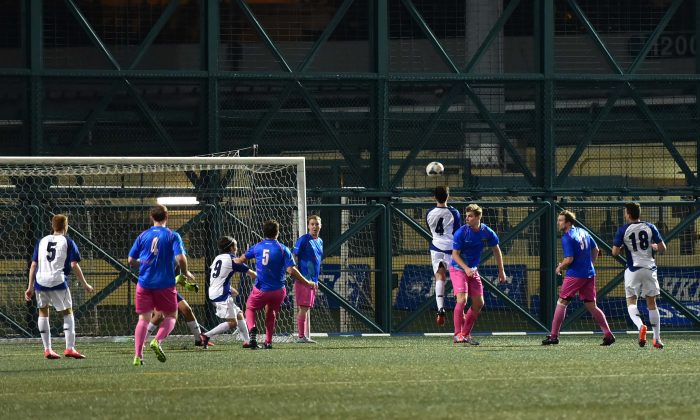 Goalmouth action in the match between Colts and HKDC Mobsters in the Yau Yee first Division, played at Sport Road on Sunday Dec 6. This entertaining all action game ended in a 4-4 draw. (Bill Cox/Epoch Times)
HK Football

Saturday’s (Dec 5) first game between Eastern and Hong Kong Pegasus was won 2-nil by Eastern, thanks to a 12th minute lob from Michael Lugo over Hong Kong Pegasus goalkeeper Kristijan Naumovski, and a 56th spot kick converted by Andreagw Barisic.

In the later game between Glory Sky Wong Tai Sin and Dreams Metro Gallery, the latter won courtesy of a 26th minute drive from Lai Lok-yin after he’d worked his way into the penalty box, and a 67th minute penalty converted by Olivier Ngue .

In Sunday’s other group A game, Kitchee were 2-1 victors over South China.

In Sunday’s other game, a group B game, BC Rangers ran out 2-1 winners against Yuen Long, with BC Rangers opening the scoring in the 23rd minute when Roberto Fronza converted a penalty kick awarded after Yuen Long goalkeeper Chiu Yu-ming had brought down Tommy Chuck in the penalty box. Yuen Long equalised in the 58th minute when Chan Cheuk-kwong headed in Yan pak-long’s corner, but BC Rangers restored their advantage in the 65th minute when Hui Ka-lok finished the rebound off of the post following Diego Folgar’s shot from a cross.

Tai Po lead the table with 28 points from 12 games, with Sun Hei second with 26 points, Citizen third with 25 points from the same games, HKFC and Yau Tsim Mong are joint fourth with 24 points, though Yau Tsim Mong have a game in hand.

Sham Shui Po lead the table on 26 points, with Sparta Rotterdam Mutual second with 25 points, and Eastern District third with 24 points, all from 11 games played.

Central and Western lead the table with 37 points, with Hoi King second with 36 points.

Yau Yee League
In the first division, Albion drew nil-all with USRC where Sean Tunde Olokigbe spurned a couple of clear cut chances and failed to be awarded a penalty for a trip in the last 5 minutes. GAS were 1-nil victors over Baker Tilly Spartans courtesy of Aaron Martindale’s strike, Wanderers were beaten 1-nil by KCC Dragons, The Store House Squadron won 3-nil against Swiss XI, and Colts drew 4-all with HKDC Mobsters.

French Kiss lead the table with 27 points, with KCC Knights second with 25 points, and Azzurri third on 23 points, all from 12 games.

In the third division, ANP were 3-nil victors over HKUSA, CSOB drew 3-all with White Youth, Dynamo were 5-1 victors over Green Cypress FC, Yan Po won 2-nil against HKSS, HOB were beaten 3-2 by Goal Visio, and Grasshoppers were 6-3 winners against CAPS.
Dynamo lead the table with 27 points from 12 games, with Yan Po second with 26 points from the same games, ANP third with 24 points from the same games, Grasshoppers fourth with 22 points, and Goal Vision fifth with 21 points.

In the fourth division, Standard Chartered were 3-2 victors over Rising Sun, Power 22 were 4-1 victors over Darts, Friends of Barclays drew 3-all with Hung Art, Bapcoll drew 2-all with Skyline, Scorpions won 1-nil against WYFC84, and Outward Bound were beaten 7-nil by Maccabi HK.

Friends of Barclays lead the table with 32 points from 12 games, with Maccabi HK second with 31 points from the same matches.