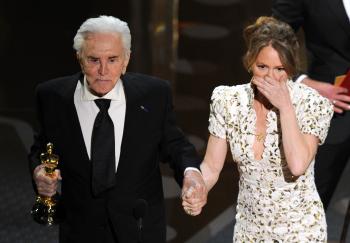 As soon as Douglas took the stage with his walking cane, he was met with the night’s first standing ovation from his peers.

Without opening the envelope and calling it “the moment we’ve all been waiting for,” he teased the audience with a series of sentences beginning with “you know.”

After building up the suspense, when he at last announced Leo as the winner, the actress from The Fighter almost leaped onto the stage and bowed before Douglas.

"Pinch me … Is this [the Oscar] mine?" Leo said upon taking her first Oscar from Douglas, and Douglas obliged and pinched her.