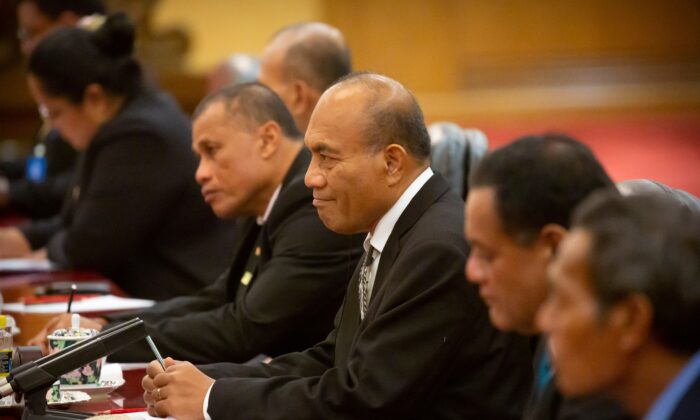 The government of Kiribati has suspended another three judges—this time members of the Court of Appeal—after they blocked attempts to deport High Court Judge David Lambourne.

The situation plunges the small Pacific nation’s democracy into crisis, leaving it without a functioning Appeals and High Court, and continues a tumultuous few weeks for the South Pacific—already susceptible to influence from the regime in Beijing.

The dismissal of the three Court of Appeal judges—New Zealanders Rodney Hansen, Peter Blanchard, and Paul Heath—comes after Kiribati President Taneti Maamau issued a stinging criticism of their decision to block the deportation of Lambourne, saying his government was “gravely concerned” by their “continuing attack on the rule of law.”

The president’s office also claimed on Facebook that the judges were turning Kiribati into a “judicial tyranny” akin to the Nuremberg judges in Nazi Germany.

Maamau’s government initially accused Lambourne of being a national security risk and claimed that he had breached his visa conditions.

Lambourne is the husband of Tessie Lambourne, the opposition leader of Kiribati and a critic of Maamau’s decision to switch diplomatic ties to Beijing from Taiwan. The attempt to remove Lambourne drew criticism from the Law Council of Australia.

“This attempted deportation is the latest in a series of efforts by the government of Kiribati to remove Justice Lambourne from the judiciary. These efforts have included refusing to issue Justice Lambourne a visa or repatriation flight to Kiribati, withholding his salary, and pressuring him to sign an employment contract which limited his tenure,” according to a statement.

In the past few months, democratic institutions across the South Pacific region have been placed under severe strain.

The zone was slated to provide economic opportunities but was opposed by then-President Hilda Heine over money-laundering concerns and because it could become a backdoor for China to exert control over the country.

At the same time, Pacific neighbour Vanuatu’s Parliament was dissolved by the government of pro-Beijing President Bob Loughman, while the Solomon Islands Prime Minister Manasseh Sogavare has overtly deepened ties with the Chinese Communist Party, including signing a multimillion-dollar deal to build 161 Huawei cellular towers.

In late August, the Solomons government denied a U.S. Coast Guard vessel permission to dock at the capital Honiara to refuel and add provisions.