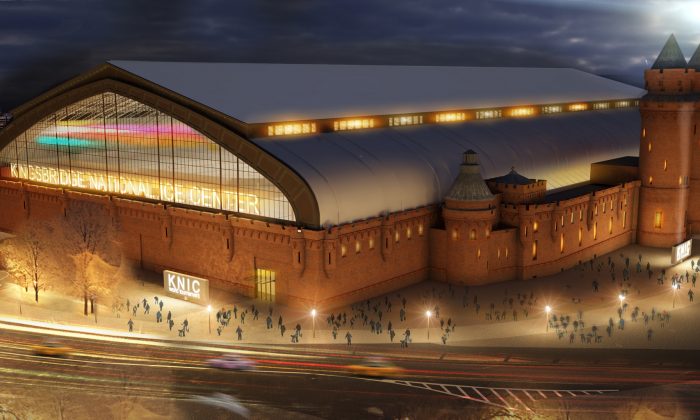 A rendering of the outside of Kingsbridge National Ice Center at night in the Bronx. (photo courtesy the Mayor's Office)
New York

NEW YORK—The Kingsbridge Armory in the Bronx, which has stood vacant since 1996, is set to be revived. The project is billed as the world’s largest indoor ice skating facility.

The 75,000 square foot facility will be known as the Kingsbridge National Ice Center (KNIC).

“Through this redevelopment the Kingsbridge Armory will now have an interior program befitting its iconic exterior architecture,” said Mayor Bloomberg in a statement. “The construction of the world’s largest indoor ice rink facility will create recreational opportunities for millions of visitors and local residents, and most importantly create hundreds of jobs for the local community. This plan is proof that working together we can put aside our differences and do what’s best for the city.”

The project is to include nine rinks on two different levels. One rink would be designed to host hockey tournaments and ice shows, with seating for 5,000 people. The project will also include 50,000 square feet of space designated for community uses.

Officials say it could draw 2 million visitors a year.

The city plans to lease the block-sized building to a private development group including a $275 million in private investments.

Construction is expected to start next year.