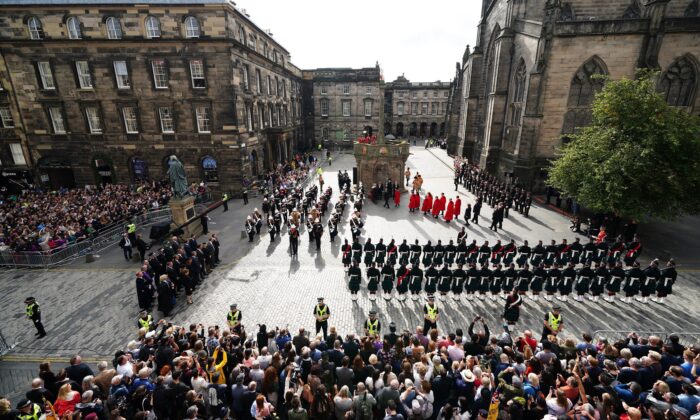 Wellwishers gathered as the accession proclamations were read out across the UK’s four nations, but the ceremony was disrupted in Scotland, where “God Save the King” was met with booing from hecklers and an anti-monarchy protester was arrested for breaching the peace.

Sinn Féin, an Irish republican party aiming to form a united Ireland, which became the biggest political party in Stormont in the last election, stayed away from the ceremony in Northern Ireland.

Party leader Mary Lou McDonald said Sinn Féin would take part in other events to pay respect to the late Queen, but not the accession proclamation ceremonies that “are intended for those whose political allegiance is to the British Crown.”

Charles automatically became king when his mother, Queen Elizabeth II, died on Thursday afternoon. On Saturday, he was formally proclaimed king of the United Kingdom of Great Britain and Northern Ireland and of his other realms and territories, head of the Commonwealth, and defender of the faith in a ceremony at St James’s Palace in London, England.

Accession proclamations have also been read out in ceremonies in Commonwealth countries such as Canada and Australia and across the UK, including at the Mercat Cross and Edinburgh Castle in Scotland, Cardiff Castle in Wales, and Hillsborough Castle in Northern Ireland on Sunday.

Thousands gathered at Cardiff Castle to hear the proclamation, which was followed by a 21-gun salute and the singing of “God Save the King” and “Hen Wlad Fy Nhadau,” Wales’s national anthem.

More than 2,000 were allowed inside the grounds but hundreds more lined the street outside the castle walls, including two protesters holding signs reading: “Not our king!”

In Scotland, thousands of people lined the Royal Mile near Edinburgh Castle, where the Lord Lyon King of Arms read the proclamation.

Before the proclamation was read, the Lord Lyon King of Arms gave a speech before declaring “God Save the King,” which the crowd repeated.

One man was heard booing throughout the cheers.

The national anthem was then sung but, afterward, people could be heard calling for a republic.

After Lord Lyon led three cheers, saying “hip hip” to replies of “hooray,” booing was heard for a second time.

Some mourners called the hecklers “disrespectful,” saying they should have avoided the proclamation if they believe in a republic.

In a separate incident, a woman appeared in the crowd opposite the Mercat Cross moments before the proclamation, holding a sign saying “[expletive] imperialism, abolish monarchy.”

She was taken away by police officers, prompting the crowd to applaud.

One man shouted: “Let her go, it’s free speech,” while others yelled: “Have some respect.”

A police spokesman said a 22-year-old woman was arrested “in connection with a breach of the peace.”

In Northern Ireland, around 200 invited guests were on the grounds of Hillsborough Castle, while hundreds more watched from under umbrellas outside the main gates.

A 40-second fanfare was sounded ahead of the reading of the proclamation, which was followed by a 21-gun salute and one verse of “God Save the King” played by the military band.

McDonald extended condolences on behalf of her party, saying it acknowledges “the very positive role the queen played in advancing peace and reconciliation between our two islands, and the two traditions on our island, during the years of the peace process.”

“In recognition of this, Sinn Féin will attend a number of events during the ten days of mourning,” she said, adding that it will not attend any of the Accession Proclamation ceremonies, which “are intended for those whose political allegiance is to the British Crown.”