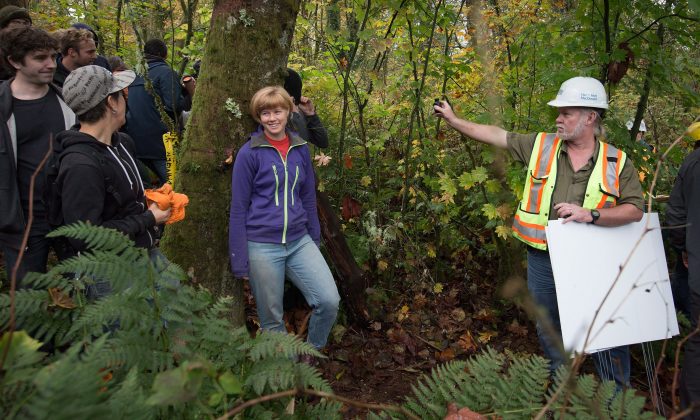 A Kinder Morgan worker with the Trans Mountain Pipeline expansion project records protesters on Burnaby Mountain after they forced the work crew to leave on Oct. 29, 2014. The pipeline issue has made its way into the Vancouver area municipal election campaigns. (The Canadian Press/Darryl Dyck)
Canada

VANCOUVER—Mixed in with the usual debates about property taxes and public transit, pipeline politics have made their way into Vancouver-area municipal election campaigns, with candidates weighing in on a plan to expand an existing line from Alberta’s oilsands.

The fate of Kinder Morgan’s proposal to triple the capacity of its Trans Mountain pipeline ultimately rests with the National Energy Board and the federal government, and that process is far from complete.

But the project has nonetheless emerged as a major election issue in Burnaby, where the route ends at a waterfront terminal, and in Vancouver, where tankers would sail past the city’s downtown en route to the Pacific Ocean.

Kinder Morgan’s proposed $5.4-billion project would see the pipeline transport 900,000 barrels of oil a day along a 1,000-kilometre route to Burnaby, up from the current daily flow of 300,000 barrels.

Opponents of the Trans Mountain project have warned of the potential impact of a spill, either from the pipeline itself or from increased tanker traffic.

Opposition has been most vocal in Burnaby, a suburban community east of Vancouver, where large stretches of pipeline would be built along a new route, including a section tunnelling through Burnaby Mountain.

Kinder Morgan recently started survey work on the mountain, which is home to a conservation park and Simon Fraser University, leading the city to accuse the company of violating bylaws that protect trees and parkland.

The National Energy Board has ruled that the company can proceed without Burnaby’s blessing, prompting the city to launch legal action. The company is also suing a group of protesters who attempted to block work crews, though that case doesn’t directly involve the city.

The pipeline doesn’t actually get a mention in Burnaby Mayor Derek Corrigan’s re-election platform, but it factors heavily in nearly every news story, interview and all candidates’ debates related to the campaign.

Rival candidate Daren Hancott of the Burnaby First party has resisted pressure to come down on one side of the debate. Hancott said it’s too early in the process, while also insisting it’s not a major issue for voters.

In neighbouring Vancouver, Mayor Gregor Robertson has attempted to make the pipeline one of the defining issues in the election. Robertson’s Vision Vancouver party lists opposition to the pipeline as a key environmental policy.

“I hear every day from Vancouverites about their concerns with more oil tankers here—it’s a big top-of-mind issue and the No. 1 threat to the city’s well-being,” Robertson said.

Robertson’s main rival, Kirk LaPointe of the Non-Partisan Association, plans to watch the approval process before taking a position. LaPointe said he won’t support the project unless it includes the best-available technology to ensure it would be safe.

LaPointe noted the city has no regulatory control over oil pipelines and he suggested the mayor is using the Trans Mountain debate to distract voters from more important issues.

“I think it’s very disrespectful to the electorate because it’s making some people feel as if the mayor can block the pipeline,” he said. “What I’ve said is that we need to respect process.”

Kinder Morgan did not make a spokesperson available for an interview. The company said in a written statement that it stays out of politics but welcomes input from municipal leaders.

Voters across B.C. are set to head to the polls on Saturday, Nov. 15.