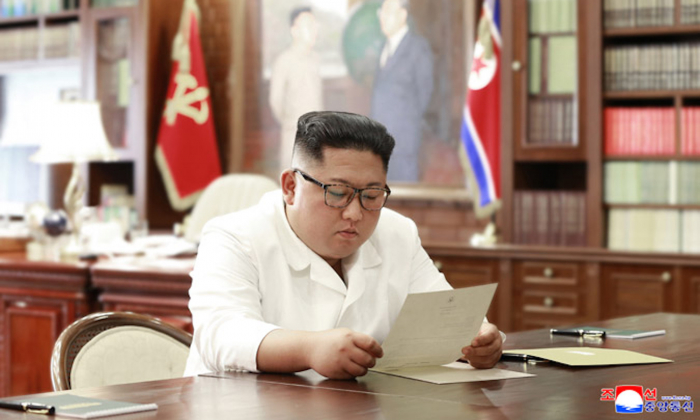 The letter is the latest indication that the two leaders are on good terms and continue to negotiate after Trump walked out of a summit with Kim in February in Vietnam.

“After reading the letter, the Supreme Leader of the Party, the state and the armed forces said with satisfaction that the letter is of excellent content,” North Korean state news agency KCNA said in a brief statement accompanying a photo of Kim reading Trump’s letter.

“Appreciating the political judging faculty and extraordinary courage of President Trump, Kim Jong Un said that he would seriously contemplate the interesting content.”

The United States is seeking the complete, verifiable, and irreversible denuclearization of North Korea’s communist regime. Pyongyang is pushing for an incremental approach, in which steps toward denuclearization are matched with reduced sanctions from Washington.

South Korea’s presidential office said it sees the exchange of letters between Kim and Trump as a positive development for keeping the momentum for dialogue alive.

“A letter was sent by President Trump and correspondence between the two leaders has been ongoing,” White House press secretary Sarah Sanders said in a statement.

Trump is expected to meet with Xi next week in Japan at the G-20 summit.

Kim said in his New Year’s speech that he would seek a “new way” if the United States persists with sanctions and pressure against North Korea. After talks broke down in Vietnam, Kim gave Trump an ultimatum, saying Washington has until the end of the year to come up with an acceptable deal.

Trump became the first U.S. president to meet with a leader of North Korea, when he held a summit with Kim in June last year in Singapore. The two leaders signed an agreement at the conclusion of that summit, with Kim committing to denuclearization, peaceful relations with the United States and South Korea, and the repatriation of the remains of U.S. soldiers who perished in the Korean War. North Korea didn’t carry out any more nuclear bomb and ballistic missile tests after the summit.

When the two leaders met in Hanoi, Vietnam, Kim pushed for concessions. Trump found the demands unacceptable and walked out of the summit.

Since then, Trump has received at least two letters from Kim. Trump described one as “beautiful” and said the other was a “birthday letter” delivered by hand on June 13.

Trump and Kim also exchanged letters in 2018 after their first summit. Sanders said at the time that the letters addressed the leaders’ commitment to working toward North Korea’s “complete denuclearization.”

In September 2018, Trump told a cheering crowd at a campaign rally in West Virginia that Kim “wrote me beautiful letters and they’re great letters. We fell in love.”

“President Trump likes Chairman Kim and he doesn’t think these sanctions will be necessary,” Sanders said in a statement at the time.