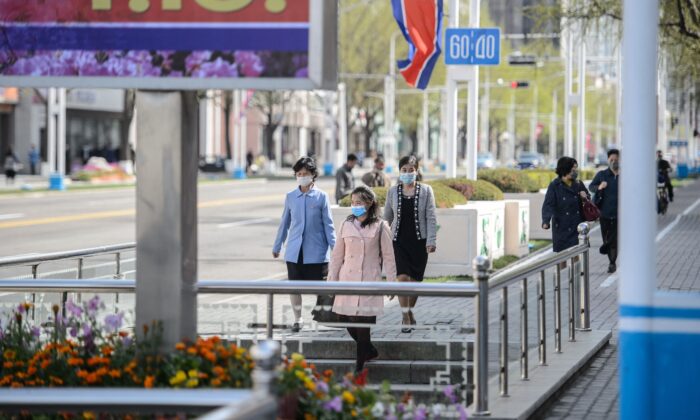 North Korean leader Kim Jong Un has ordered the military to help stabilize the supply of the medicines in Pyongyang, blaming officials for their “irresponsible work attitude” that he claims has caused the country’s outbreak.

The overall number of fever cases in North Korea reached 1.2 million as of May 15, of which more than 648,630 have recovered, and 564,860 were receiving medical treatment.

At a May 15 emergency politburo meeting, Kim said that medicines procured by the state had not been supplied to people in a timely and accurate manner through pharmacies.

He laid blame for the poor response on the Cabinet and public health sector, criticizing “their irresponsible work attitude and execution ability,” KCNA reported, quoting the leader as saying they “have not rolled up their sleeves” and were “not properly recognizing the present crisis.”

He then ordered the “powerful forces” of the military to be used in stabilizing the medication supply, urging officials to “not allow any slightest imperfection and vulnerable points” in the epidemic prevention system.

KCNA also reported that Kim visited pharmacies in the capital after the meeting, where he criticized the pharmacies for lacking the required equipment to safely dispense medicines.

“He referred to the situation in which salesperson offer service without proper sanitary clothing and a hygienic environment that does not reach the standard,” the state news agency said.

KCNA said that fever has spread “explosively” across the country since late April, with some having since been confirmed as Omicron cases.

It remains unclear how many of North Korea’s 26 million population have been immunized for COVID-19, given that the nation has repeatedly rejected offers of vaccine supplies from the U.N.’s COVAX initiative, designed to help poorer countries with vaccine access.

Last year, the nuclear-armed nation turned down a COVAX offer of 3 million doses of the Sinovac vaccine and rejected planned shipments of AstraZeneca’s vaccine. In February, COVAX reduced its initial allocation of 8.11 million doses of vaccines to North Korea to 1.54 million doses.

Gavi, a global vaccine alliance that co-leads the COVAX program, stated that the initial number of doses allocated to North Korea was irrelevant due to COVAX focusing more on “needs-based” vaccine distributions.

Meanwhile, South Korea’s new President Yoon Suk-yeol has offered to send COVID-19 vaccines and other medical supplies to North Korea, Yonhap News Agency reported on May 10, although whether Kim accepts the offer remains to be seen. The regime is more likely to accept assistance from allies in China or Russia.