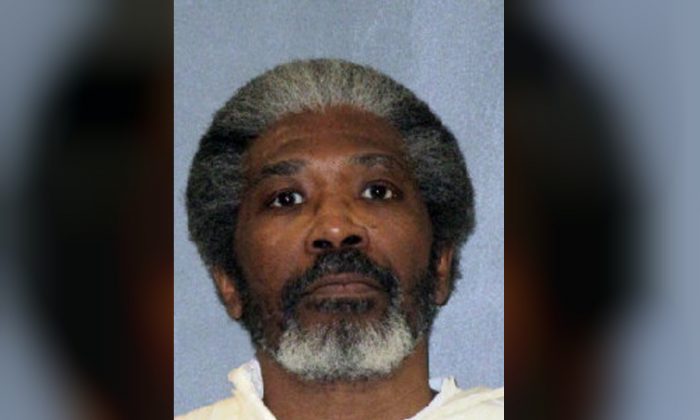 Three decades after he shot a police officer twice in the head at a Houston bookstore, just one hour after the Supreme Court rejected a final appeal, 61-year-old Robert Jennings was executed by lethal injection, as dozens of police officers stood in vigil outside, along with the fallen officer’s mother.

Jennings killed police officer Elston Howard during a botched robbery at an adult bookstore in 1988. Howard was 24 at the time.

Howard’s mother was escorted by the Houston police chief outside the prison, who said that the police force would not abandon families who lost officers.

Speaking outside the prison in Huntsville, Chief of the Houston Police Department Art Acevedo said, “In this police department here in Houston … no family will finish their journey to justice alone—we will be here with them.”

Jennings was killed by lethal injection, given at 6:15 pm. He was pronounced dead 18 minutes later, reported the Texas Tribune.

A request to delay the execution scheduled for Jan. 30 was denied by higher and lower courts.

The U.S. Supreme Court had earlier that day denied an appeal by Jenning’s attorneys to delay the execution. The court rejected the argument that during the trial, attorneys failed to ask jurors to fully consider evidence—including details of his remorse for the officer’s shooting and possible brain damage.

A twice-convicted robber, Jennings had been on parole for about two months when prosecutors say he entered Mr. Peeper’s Bookstore with the intention of robbing the business.

Since being paroled, Jennings had gone on a crime spree, committing about 10 robberies, including having already robbed the adult bookstore 12 days before Howard’s slaying.

The 24-year-old Howard was in the middle of arresting the store clerk for operating a pornographic video arcade without a permit when Jennings shot the officer twice in the head.

Howard, who had been wearing a jacket with the words “Houston Police” on it, staggered for a few feet before falling to the ground, where he was shot twice more by Jennings. The clerk later testified the shooting was so quick, Howard never had a chance to unholster his gun.

‘This is The Final Step’

Jennings was arrested hours later when he went to a Houston hospital after being shot in the hand by his accomplice, who got angry at Jennings for shooting the officer.

Jim Birch, who worked alongside Howard, described him as “one of the finest officers I ever had the privilege to supervise and work with.” Speaking outside the prison during Jenning’s execution, he said Howard was a “witty” and “creative” individual and “admired by all of the officers that worked with him.”

“To my friends and family, it was a nice journey,” Jennings said in his final statement, reported CBS. “To the family of the police officer, I hope y’all find peace. Be well and be safe and try to enjoy life’s moments, because we never get those back.”

Gerald Schindler, who was in the police academy with Howard, told reporters that the officer “always had a joke and a smile.”

“I remember him as very young” said Schindler, “and now he’s going to be young forever.”

Commenting on the length of time between the crime and the execution, police chief Acevedo said, “I think that justice delayed to an extent is injustice continued, but at the end of the day when the state’s going to take someone’s life, there has to be a process. People need to be afforded due process. Although the family had to wait a long time, in this case, the day is here. The day of reckoning is here.”

Acevedo said he knows that there will be people who criticize the police for holding a ceremony at the execution.

“But they just don’t understand,” he said. “They don’t understand that the 5200 men and women serving today need to know that if they lose their life … that we’re going to be with the family every step of the way. And truly, this is the final step.”