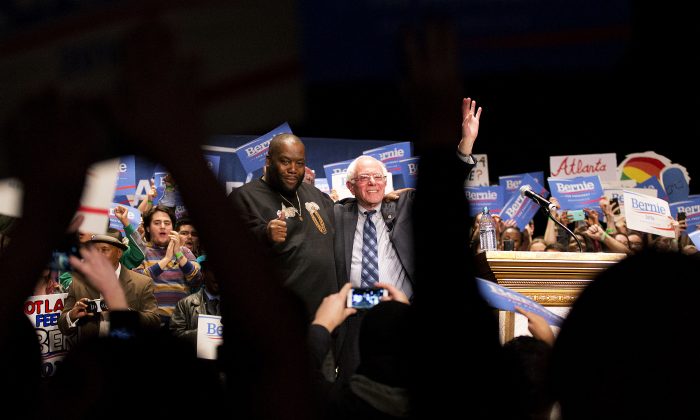 Killer Mike, perhaps the most notable of Bernie Sanders’ black supporters, took to Twitter to rebut Ta-Nehisi Coates after The Atlantic writer criticized Sanders for his comments on reparations.

Sanders responded to a question about whether he was in favor of reparations for slavery.

“No, I don’t think so. First of all, its likelihood of getting through Congress is nil. Second of all, I think it would be very divisive. The real issue is when we look at the poverty rate among the African American community, when we look at the high unemployment rate within the African American community, we have a lot of work to do,” Sanders said.

“So I think what we should be talking about is making massive investments in rebuilding our cities, in creating millions of decent paying jobs, in making public colleges and universities tuition-free, basically targeting our federal resources to the areas where it is needed the most and where it is needed the most is in impoverished communities, often African American and Latino.”

Coates wrote in a column that Sanders should stand up to “white supremacy,” and claimed that Sanders “doesn’t actually understand the argument.”

Trump on Oscar Boycott: ‘Whites Don’t Get Any Nominations’ on BET

“To briefly restate it, from 1619 until at least the late 1960s, American institutions, businesses, associations, and governments—federal, state, and local—repeatedly plundered black communities. Their methods included everything from land-theft, to red-lining, to disenfranchisement, to convict-lease labor, to lynching, to enslavement, to the vending of children,” he noted.

“So large was this plunder that America, as we know it today, is simply unimaginable without it. Its great universities were founded on it. Its early economy was built by it. Its suburbs were financed by it. Its deadliest war was the result of it.”

“I love the writings of @tanehisicoates. I am very curious why every one thinks his critique of Sanders of some kind of death nail,” the rapper said via Twitter.

Sanders Health Plan Would Be More Generous Than Medicare

“The fact that blacks have to even justify the case for reparations is shameful. The fact that only 1 candidate is being called to task is [expletive]. Especially when that candidate is the only one with policy proposal that directly effects the black community if elected.”

He added that the candidate he thinks would be most sensitive to reparations–“and the other things that can/will help black people”–would be Sanders.

“I will and encourage other blacks that are concerned with our poor, working class, and middle class to vote Sanders,” he said.