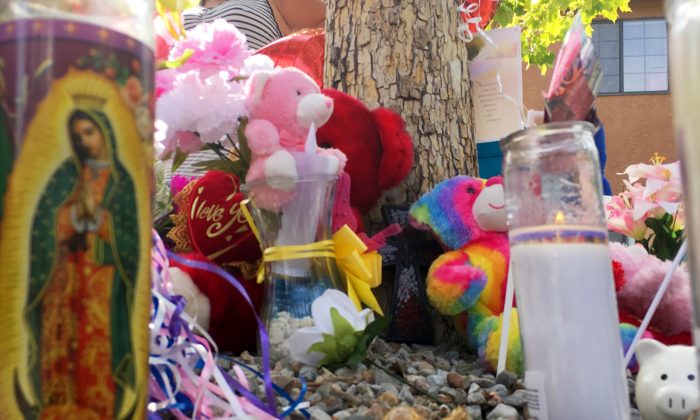 A memorial for a 10-year-old girl who police said was sexually assaulted, strangled then dismembered is seen at an Albuquerque, N.M., apartment building Thursday, Aug. 25, 2016. On the day the girl was going to celebrate her 10th birthday, she was found dead Wednesday in her family's apartment by Albuquerque police, her dismembered remains lying under a burning blanket. The girl's mother, 35-year-old Michelle Martens, her 31-year-old boyfriend, Fabian Gonzales, and his 31-year-old cousin, Jessica Kelley, are facing charges. (AP Photo/Russell Contreras)
Crime and Incidents

ALBUQUERQUE, N.M.—Relatives of an Albuquerque woman whose 10-year-old daughter was drugged, sexually abused, and then brutally murdered in the mother’s apartment last week are mystified over how she got involved with two convicted criminals accused with her of causing the girl’s death, the family spokeswoman for the child’s relatives said Monday.

Laura Bobbs lived in the same apartment complex as the girl’s mother, Michelle Martens, for five years and said she and Martens’ parents saw the mother daily but never picked up clues of anything amiss.

They were also unaware she had been dating the boyfriend convicted of child endangerment for a month before the killing and letting his cousin stay at the apartment just after the cousin was released from prison.

Martens, Fabian Gonzales and his cousin Jessica Kelley are all jailed for lack of $1 million bail, facing charges of child abuse resulting in death, kidnapping and tampering with evidence in connection with the Aug. 24 killing of Victoria Martens.

She was found dead by police in the apartment the day she was to celebrate her 10th birthday, with authorities saying her remains had been wrapped in a blanket and set on fire in a bathtub.


At the grandparents’ first appearance Monday in public following Victoria’s death, Bobbs thanks Albuquerque residents on their behalf for an outpouring of prayers and support.

The grandparents and other relatives did not speak to reporters but clutched each other and some cried while wearing buttons made from a smiling photo of Victoria adorned in purple, her favorite color.

Bobbs said in an interview later that Martens was a hard-working single mother and that she and Martens’ parents did not know she had gotten mixed up with Gonzales and Kelley.

“We can’t tell you where this came from,” Bobbs said.

All AM on @KOB4, the latest on the investigation of Victoria Martens’ death, & the emotional community response. pic.twitter.com/KkdjKYQhA2

Bobbs thanked Albuquerque residents on behalf of the grandparents and other relatives for an outpouring of support and prayers.

New Mexico officials have said they never received any reports of violent or sexual abuse about the household where Victoria lived with her mother.

Gonzales had been convicted of child endangerment last year, was supposed to be monitored by a probation officer and given drug tests but never was because corrections officials say they never received a judge’s order mandating the supervised probation. Martens told detectives she knew Kelley had been released from jail and let her stay in the apartment.

Bobbs said Victoria’s killing is an example for New Mexico state officials that they must do more to prevent what has turned into a horrific string of children killed by relatives or people close to them in recent years.

“This family shouldn’t be standing behind me grieving,” Bobbs said. “Let’s put our children first. They are our future.”

Martens told detectives that Gonzales injected her daughter with methamphetamine to calm her down before he abused her. Victoria was killed thereafter.

Bobbs and the grandparents saw Martens daily but did not know she was going out with Gonzales and never saw signs that she might be using drugs or have them around her.

Neighbors described Victoria as a happy and outgoing child and Bobbs said she always appeared to be well cared for by her mother. Martens worked at a grocery store near the apartment complex with a community pool where the girl was often seen swimming.