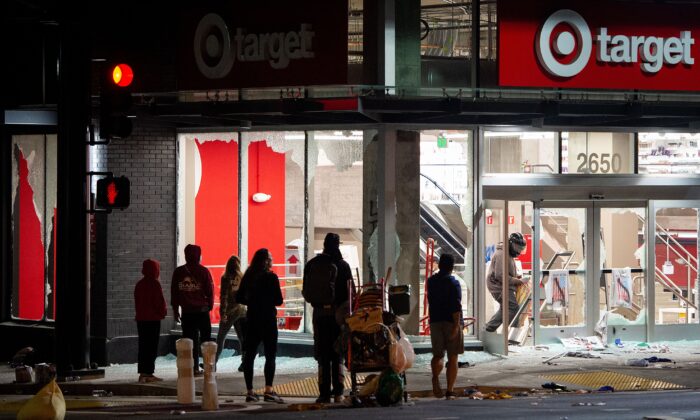 Looters rob a Target store as protesters face off against police in Oakland, Calif., on May 30, 2020. (Josh Edelson/AFP/Getty Images)
US News

The sister of a federal officer who was shot and killed during a George Floyd protest told Congress Wednesday that the calls to defund or abolish the police are absurd.

“It is a ridiculous solution to claim that defunding police departments is the solution to police brutality and discrimination because it’s not a solution. It gets us nowhere as a nation and removes the safety net protection that every citizen deserves from their communities elected officials,” Angela Underwood Jacobs said at the House Judiciary Committee’s hearing on police brutality, as reported by Fox News.

Her brother, Patrick Underwood, was stationed in front of a courthouse in Oakland, California, in late May when a vehicle pulled up and someone inside opened fire on him and another security officer. Underwood was killed and the other officer was injured, officials said at the time.

The protest was over the death of Floyd, who died in police custody in Minneapolis, sparking calls to reform police. However, some activists and local officials have attempted to push to totally defund or abolish police departments, which in turn has drawn significant backlash from some Democratic and Republican officials alike.

Jacobs criticized the use of violence and intimidation against police officers, including looting and arson.

Such acts are “blind violence” and “are dividing us as a nation,” she said. “We will never solve generational systemic injustice with looting burning, destruction of property, and killing in the name of justice.”

“When those in a position of authority choose to abuse their power, that is a very definition of oppression. And when innocent people are harmed in the name of justice, no one prevails. We all lose,” she added. “Police brutality of any kind should not be condoned, however, it is blatantly wrong to create an excuse out of discrimination and disparity to loot and burn our communities, to kill our officers of the law.”

Meanwhile, Floyd’s brother Philonise Floyd, called on Congress Wednesday that he is “here today to ask you to make it stop. Stop the pain.”

Floyd added: “Be the leaders that this country, this world, needs. Do the right thing.”

Republicans as well as Democrats have called for a national registry of use-of-force incidents, so police officers cannot transfer between departments without public awareness of their records. There is also bipartisan support for increasing the use of police body cameras, ending no-knock warrants as police used to enter the home of Breonna Taylor who was killed in Louisville, Kentucky, and other changes to police practices and oversight.