The volcano, which has been disrupting life on Hawaii’s Big Island since May 4 might finally be slowing its rate of eruption.

On Aug. 20, the United States Geological Survey posted this message, “Seismicity and ground deformation are negligible at the summit of Kīlauea Volcano.

“On the volcano’s lower East Rift Zone (LERZ), only a few ocean entries are oozing lava; laze plumes are minimal. Sulfur dioxide emission rates at both the summit and LERZ are drastically reduced; the combined rate is lower than at any time since late 2007.” the message continued.

In an Aug. 17 alert, USGS said, “Kīlauea Volcano has remained quiet for well over a week now, with no collapse events at the summit since Aug. 2. Except for a small, crusted-over pond of lava deep inside the fissure 8 cone and a few scattered ocean entries, lava ceased flowing in the LERZ channel on Aug. 6.”

USGS is quick to point out that this might mean the volcano has stopped erupting, or it might be a brief pause amid an ongoing eruption cycle.

Months of Lava, Gas, and Earthquakes

Kilauea has been erupting since May 3, spewing lava through numerous vents along the flank of its cone. Some of the lava flows entered the ocean, creating a toxic haze, while others oozed across the landscape, burning trees and houses as they went.

During those several months, Hawaii suffered some 10,000 tremors and many major quakes. In early June, a U.S. Geological Survey official said that the Kilauea volcano in Hawaii experienced 500 earthquakes in one day.

That figure “is the highest rate ever measured there,” said USGS seismologist Brian Shiro.

Lava flows consumed more than 700 homes and one charter school, so far, according to Hawaii News Now. Hundreds more homes were either damaged or left inaccessible by the slow-flowing molten rock.

Because the lava was slow moving, residents were evacuated, so while homes were lost, lives were not.

Still, the lava engulfed more than 6,100 acres of the island—and added at least 700 acres of new land where the lava flows entered the ocean.

Basketball-sized “lava bombs”—chunks of superheated rocks ejected from the volcano like artillery shells—struck on and near some tour boats of the coast of the Big Island, injuring 23 passengers.

When the lava flows entered the ocean it creates huge toxic clouds of steaming “laze” or lava haze, boiling of water and hydrochloric acid filled with tiny particles of volcanic glass. This laze is toxic and caustic. USGS warns people not to walk into it. 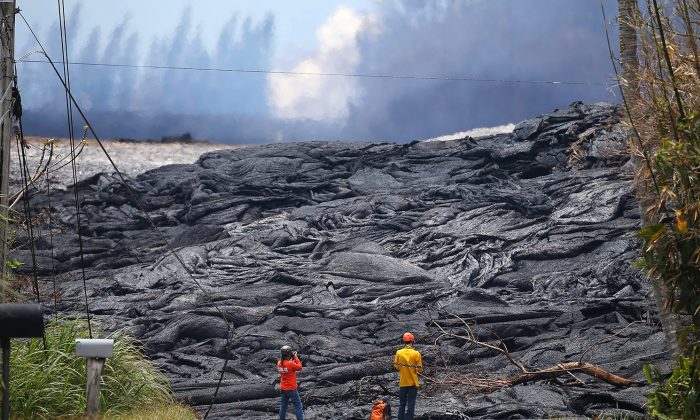