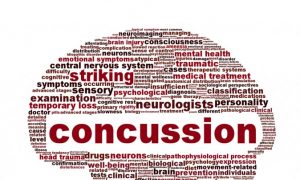 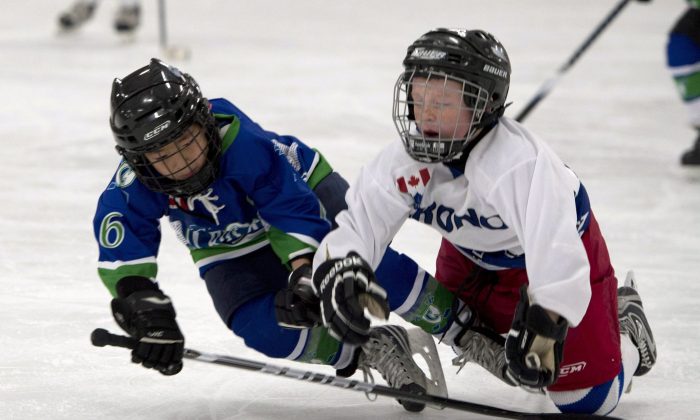 Two kids playing hockey fall to the ice in a novice-level game. Children playing hockey need to have greater respect for their fellow players as a preventative measure against concussions. (The Canadian Press/Doug Ives)
Canada

Two-time Olympic hockey gold medalist Cassie Campbell-Pascall and concussion expert Dr. Charles Tator have teamed up to raise awareness for player safety in hockey by promoting respect and responsibility on and off the ice with both kids and parents.

Their goal is to bring back the fun in minor hockey and move away from the mentality that kids should be treated like NHL players or Olympians. Ultimately, this should lead to reduced concussions, which have arguably become the biggest risk in the game in recent years.

“I don’t think we’re trying to take away the natural competitiveness of the game,” said Campbell-Pascall in a phone interview. “We’re just trying to remind parents and kids that we can’t keep playing the game of hockey the way it’s going, where it’s become a little bit dirty. It’s become ‘win at all costs.'”

Tator, a neurosurgeon, agrees that the mentality of putting winning above all else has become dangerous.

“We don’t want to see kids hurt because the team is practising win-at-all-costs hockey rather than responsible, respectful hockey,” said Tator. “Those are all important issues that we try to deal with and promote in Safe and Fun Hockey.”

Chevrolet Safe and Fun Hockey was started in 1999 and has focused on different aspects of the game over the years, including the role of parents in minor hockey. Recently, the initiative has targeted brain health and safety.

While the program is geared toward the kids, Tator points out that the parents, coaches, and referees also have to be aware of sportsmanship and injury prevention.

“We want the coaches to be in charge of not only skill development, but safety on the ice,” he says. “That responsibility needs to be taught. Parents also have a big role to play in ensuring that the coach carries out those responsibilities.”

Campbell-Pascall urges parents to view hockey the way they would any other parenting situation, with consequences for actions. One point she makes is that children on the playground would be sent to the principle’s office and get in trouble if they hit another child.

“If we have children that are able to act however they want on the ice just because it’s hockey, I think we’re missing the boat,” she says. “This program is just a reminder that we need to play with a lot more respect out there.”

Tator encourages everyone with a role in hockey to complete the online concussion training program hosted by Parachute Canada. For just $5, the course identifies the signs and symptoms associated with a concussion, details why a child with a suspected concussion must be removed from the game immediately, and examines each step of the 6-step Return to Play Protocol.

The emphasis on the Return to Play Protocol is that it should be done gradually to allow the brain time to heal. A player cannot proceed to the next step in the protocol until they are symptom free. In Tator’s opinion, the soonest a player should return is approximately a week, but for younger players that is doubled.

In 2002, Hockey Canada adopted a new penalty for checking to the head. Just last year, body-checking was removed for players 13 and under.

Concussions are nothing new, especially in sports, but the reporting of concussions has dramatically increased. However, whether there are actually more concussions in hockey now than there were in previous decades is hard to ascertain.

Tator explains that in previous decades, doctors weren’t on the same page when it came to concussions so statistics weren’t properly kept. What one doctor would have considered a concussion, another doctor might have thought was merely a “ding” or “bell ringer.”

The good news is that for the most part, doctors are now all speaking the same language thanks to standardized definitions. The whole world is paying more attention to concussions and that can only be taken as a positive.

“We now know that a concussion is definitely a brain injury,” says Tator. “We also know that repetitive concussions can lead to significant consequences like brain degeneration, even many years later.”

Kids, especially, are being taught to report to their parents and coaches that a concussion has occurred. And parents are more aware of what a concussion is and can recognize that headaches and dizziness are important symptoms of a concussion and that their child should go to a doctor.

Some studies have shown that female hockey players sustain more concussions than their male counterparts. Campbell-Pascall says she feels there are a few factors influencing these numbers.

Since there is no body-checking in the women’s game, Campbell-Pascall says female players don’t expect to get hit, even though there is body contact. She also notes that neck strength has become a prevalent factor.

Another possibility is that boys are still not reporting concussions as often as girls.

“Maybe boys are a little afraid to come out of the lineup because of the competition,” she says. “I don’t know what those reasons are, but the girls are a little bit more forthcoming when it comes to concussions.”

According to Tator, studies now show the adolescent brain is the most susceptible to concussions. He explains that through adolescence, the brain gets bigger by forming new connections. As you learn more and develop new skills, more connections are being made.

But while progress is being made, the brain is difficult to study and there is still a long way to go. One of the biggest frustrations doctors face is that they still don’t have all the answers.

“One of the theories is that concussions are really a connection disease,” Tator says. “The connections come apart and that’s what produces the dizziness and the headaches, the nausea, the memory changes, and personality changes.

“All of those features are part of post-concussion syndrome. It’s probably a disease of connections, and during adolescence a huge number of those connections are being made.”

Therefore it is paramount for kids and adolescents as compared to adults to give more healing time for concussions and not think they’re professionals when their brain health is at stake.

More information about prevention and helmet recommendations can be found at www.parachutecanada.org. For more information or to register for the Hockey Helmet Program, visit www.safeandfunhockey.ca.

Melissa Boufounos is an ice and ball hockey player currently studying natural nutrition. She has a diploma in broadcast journalism and a post-grad diploma in sports journalism. Follow her on Twitter @mbouf.

With additional reporting by Rahul Vaidyanath