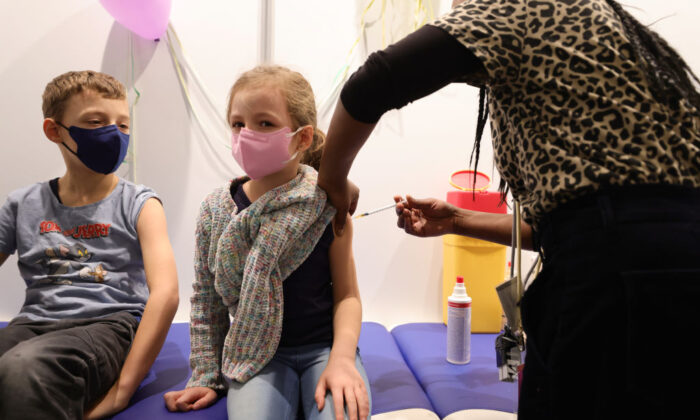 Children receive a dose of COVID-19 Pfizer-BioNTech Comirnaty vaccine for children at the children's section of the Lanxess Arena vaccination center in Cologne, Germany, on Dec. 18, 2021. (Andreas Rentz/Getty Images)
Australia

Australia’s vaccination rollout to children aged between five and 11 has begun ahead of the return to school on Jan. 28.

Children aged five to 11 are now eligible to receive two doses of the Comirnaty (Pfizer) vaccine, eight weeks apart, and the dose will be one third that of kids aged 12 and over.

This comes after the Therapeutic Goods Administration (TGA) provisionally approved the Pfizer vaccine for this age group on Dec. 5.

In a media release on Monday, Australian Health Minister Greg Hunt said that three million doses of the vaccine are being distributed around the country, enabling the two point three million children in this age group to get their first inoculation.

Prime Minister Scott Morrison further elaborated at a press conference on the same day, saying that two million of the three million doses procured are in the country and 835,000 vaccines are already in fridges at the 6,000 locations across Australia where children can go to be jabbed.

However, reports of supply issues have already emerged, one from Royal Australian College of General Practitioners Victorian chair Anita Munoz, who said that supply was sporadic.

She told AAP on Monday that some GP practices were given 100 doses a week, and others just 100 doses a fortnight.

“That is, really, terribly inadequate numbers for general practices to vaccinate kids,” she said.

“The supply itself is unreliable and sporadic, and we understand that’s in part because the logistics industry is affected by COVID itself.”

Munoz added that in Victoria, the average GP has around 1,500 children on their books.

“So you can imagine how slow that means general practice will be forced to go based on the paucity of supply,” she said.

Meanwhile, Lieutenant General John Frewen, head of Australia’s vaccine rollout, said on Monday that as well as the 835,000 doses that were readily available, another 400,000 were in transit.

“I do want to emphasise again that there is enough paediatric doses in the country to offer every 5 to 11-year-old a first dose before they commence school this year,” he said.

He also said that there was a huge uptake of bookings prior to Jan. 10, and he understood the frustration of getting bookings for some, advising parents who could not book a shot through their GP to try pharmacies and vaccination hubs.

The concern about immediate COVID-19 vaccine supply for 5 to 11-year-olds comes as children are set to return to school on Jan.28.

In a social media post on Jan.7, Professor Kerryn Phelps said that it makes no sense to send primary school children back to school at the peak of this wave of the pandemic and when the vaccination rate amongst this age group is low.

“Primary school children are still mostly unvaccinated and there are supply issues with the vaccine, and that means that most children will not be vaccinated before the start of term,” she said.

“The long-term implication of even mild COVID infection for a child, including long COVID, are still largely unknown.”

She continued that even if a child is vaccinated, they can still pass on the infection to teachers, parents, and grandparents, some of whom could be medically vulnerable.

However, former Deputy Chief Health Officer and infectious disease expert Dr Nick Coatsworth told the Today Show on Monday that the most important cohort to have vaccinated was always going to be the adult population.

“And I wanted to remind parents of that, that this is primarily a disease that affects adults severely and affects children mildly, so if you’re a parent, as I am, I don’t think we need to get concerned about how quickly we get our 5 to 11-year-olds vaccinated,” he said.

“In particular, do not be concerned if you can’t get an appointment before school goes back.”

Coatsworth said that although there is concern about children catching COVID-19 and passing it on to members of their family, there needn’t be such a concern.

“The United States just released their data on mortality, on death in fully vaccinated individuals, and across an entire community,” he said.

“We have got to leave this fear behind and replace it with facts.”