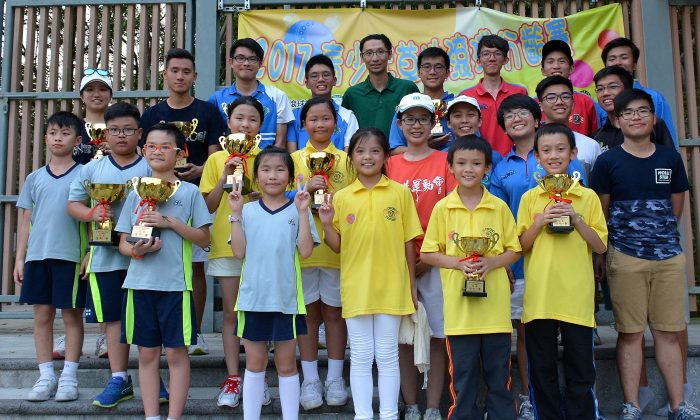 Some of the 68 youngsters that participated in the U25 Age Group Lawn Bowls Competition last Sunday, July 30, 2017. (Stephanie Worth)
HK Lawn Bowls

Kids Brave the Heat to Complete the Age Group Competition

Hong Kong recorded the highest temperature of the year at 34.8°C, with some areas, including the Tseung Kwan O area where the competition was played, reaching 37°C.  The competition, which was postponed when tropical cyclone Roke hit Hong Kong on July 23, carried on as planned but all participants were reminded to take more water and wear adequate protection gear.

The event was held at Hang Hau Man Kuk Lane Park, played in a three woods pairs format with no limitation on the combination of gender in each team.  The participants were divided into four groups, from the youngest group of 8-11 to the most senior group of 18-25 years old.

They came from behind to defeat young girls Summer Shen and Gillian Ng 10-5 in the final to lift the trophy.

Skipper Yiu, has bowled for more than three years, entering this competition for the second time, believed that the victory was a result of good teamwork, “We are relaxed and performed to our usual standard. I am happy that the results went our way to win the title.”

The two players both started the sport as part of the school activities and they found it very interesting. Wong said lawn bowls has help him to concentrate in daily life and Yiu treasured the relaxation during matches.

Young girl Shen was the defending champion of the competition and a runners-up at the Inter-School Competition this year, represented LTSSLS. She was disappointed to lose in the final but looked forward to the competition next year, when she will move up to the age group of 12-14. Her brother Hinson Shen won the 15-17 group the day before.

Ng was a P.5 student with the STFA Lee Kam Primary School and started the game because of his father who was also a bowler. The only complaint she has about the sport is that players need to sweat a lot.

In the most senior group, defending champion James Tang and James Po from the Youth Team defeated the Craigengower Cricket Club pair of Martin Sham and Amy Choi to lift the title.

There are three key Lawn Bowls events this coming weekend. The Classic Singles Qualifier takes place on Saturday and Sunday Aug 5-6, starting at 9am and will be played at CdeR, KBGC and KCC greens. There are two Sports for All Days on Sunday Aug 6, the first Island East Sports Centre Lawn Bowls Funday will take place between 2pm and 7pm, and at Hong Kong Velodrome, Tseung Kwan O, an indoor Lawn Bowls Play-in will take place between 2pm and 6pm.