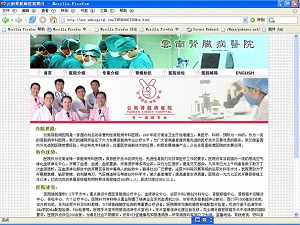 Currently the website containing reports on Han Xiuwu has been removed. Our reporter has obtained the following link from Internet cache files. (The Epoch times)
China

Recently it was reported that Haidan Hospital patient Xue Yanlin received two kidney transplants within 48 hours, for a cost of 220,000 yuan (US$27,440) resulting in a financial loss as well as the death of the recipient. The fact that physician Han Xiuwu at Haidian Hospital in Kunming city was able to use kidneys from living donors at will within a very short period of time has attracted public attention.

Died from a Kidney Transplant Performed Twice within 48 Hours

According to this article, on December 19, 2004, 49 year-old Xue Yanlin from Fuyang in Anhui, suffered from uremia and was hospitalized in Beijing Haidian Hospital's transplant center. Nine days later, on the afternoon of December 28, a physician from the Transplant Center brought kidneys from an outside source with blood type and Penel reactive antibody (PRA) that matched Xue's. At 10:10 that evening, Xue was wheeled into the operating theatre; by 11 p.m. that same night, the chief surgeon Han Xiuwu, who had rushed back to Beijing from Chifeng, Inner Mongolia, entered the operating theatre in a hurry.

Four hours later, Xue Yanlin was wheeled out of the operating room. Han said: “The surgery was not successful.” On the morning of 29th at 9 am, B scan examination confirmed failure of the kidney transplant operation. According to Xue's husband Lu Xiaoxing, “The diseased kidney was not removed because Han was in a hurry to get back to Kunming on the same day for another operation; he said there was a kidney source there, he would bring back another kidney the next day, remove the diseased kidney and replace it with the new kidney.”

On December 30, Xue underwent emergency surgery due to a heart attack. By 11 pm that evening, Han returned from Kunming with a new kidney and performed the kidney transplant on Xue for a second time. After much painstaking effort, Han emerged from the operating theatre and announced that the transplant operation had failed again. The reason for both the failures was acute rejection. Han said that this was a phenomenon he had never encountered before.

After the surgery Xue developed complications, both acute pancreatitis and a lung infection. Although Xue was lodged in a 5,000 Yuan- (US$624) per-day special care hospital room, she also developed bed sores, and everyday her husband Lu had to clean the mucus in her mouth, attend to her bowel function and the perspiration on her back. Lu said angrily: “My wife was already unable to talk at that time, every time she saw me, she would pinch my arm to express her thoughts and feelings and she cried all the time.” On January 30, 2005, 30 days after the operation, Xue Yanlin passed away in tears.

After spending 220,000 yuan (US$27,440) in medical expenses, his wife's death enraged Lu. He carefully examined the medical records, consulted experts and discovered the hospital made four major mistakes. Consequently Lu brought the case to the Haidian court requesting the Haidian hospital to pay for a total of over 600,000 Yuan (US$74,836) in compensation covering medical costs, mental loss, the funeral expenses, etc.

According to the first trial investigation and information provided by Lu's attorney Liu Ruishuang, the Haidian Hospital use the 'Haidian Hospital Transplant Center' stamp, but the Transplant Center was not registered with the Beijing Health Department and did not have a license to perform transplant operations. Hence the transplant operations they performed were illegal medical practices.

The Secret Source of Kidneys

A Chinese Internet surfer commented: The Haidian hospital gets kidneys as easy as buying pig kidneys. The first kidney was found in nine days and the second kidney could be picked up immediately in Kunming. Usually, a suitable kidney can be found between three or four hundred people only one out of three or four hundred people will have a suitable kidney, but it looked like Dr Han Xiuwu was not too concerned about the source of the kidneys. It looked like he transplanted the kidney without performing a matching test as if it would be a waste not to use the kidney he had in stock.

There wasa letter to editor section of The Epoch Times concerning the 7th April report entitled “2,500 yuan for a kidney”. An Internet surfer posted a year ago, on December of 2004 at 6:23pm: “I got a new kidney at the Shanghai Chang Zheng hospital. There was an abundance of kidneys. I waited for two-and-a-half months for a kidney. You can look for Dr Han Xiuwu from the Beijing General Railway Hospital transplant operations department. He has many kidney sources (he has an ongoing alliance with the kidney disease hospital in Yunnan province), kidneys are abundant in Yunnan.”

Recently there was a report on Sound of Hope radio about kidney sources in Yunnan. According to family members of kidney transplant patients in Shanghai Zhong Shan hospital, the hospital has two major sources for kidneys (Text transcribed from audio recording:) “From what I know, one is in Yunnan, the other is in Hubei.” “Yunnan is just a two-hour flight away, therefore the kidneys are fresh, and the Shanghai hospitals usually send someone to collect the organs because the laboratory tests done in Yunnan are very inadequate. The organs must be matching and might not meet the requirements of Shanghai hospitals.”

Readers might wonder, since Han Xiuwu is based in Beijing, why does he have to go to Kunming to perform transplant operations and also bring back kidneys from Kunming? Who is Han Xiuwu? According to the Haidian hospital website, the hospitals organ transplant center was established in November 2003 and Han Xiuwu was recommended as supervisor of the transplant center. He has many years of clinical experience and scientific research in kidney and pancreas transplant. He also studied at the Minnesota University and Pittsburgh transplant centers in the U.S. and was in charge of kidney transplants in the Chaoyang and Tongren hospitals. At present, he has successfully carried out more than 100 kidney transplants at the Haidian hospital.

He graduated from the Anhui medical university and was sent to the radiology department of Beijing Chaoyang hospital in 1988. He became an assistant to transplant expert Guan Delin in 1995 and was thereafter quickly promoted to chief surgeon. At the end of 2003, Han Xiuwu was asked to establish the organ transplant department in Haidian hospital and in four months, he completed 38 transplant operations at the Haidian hospital and on average performs a kidney transplant every two to three days.

In the report Han Xiuwu revealed his next goal is to attempt liver transplants. “Liver transplant is just simply a step away for me because when I remove kidneys, I often take out the liver as well for other doctors to use. And furthermore, I learnt how to perform liver transplants in the U.S.” There was debate that his words accidentally revealed the truth. He was able to obtain the liver while removing the kidney from the “donor.” Where in the world is there such a generous “donor”?

Another fact worth mentioning is that this report on Han Xiuwu has been removed. Our reporter obtained this information from Internet cache files.