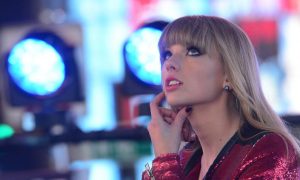 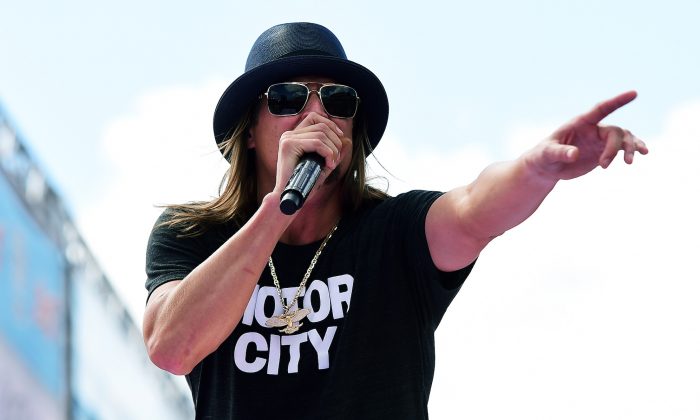 Kid Rock took to social media to call out Taylor Swift’s political push for progressive liberal ideas as a way to win over the Hollywood left.

“Taylor Swift wants to be a democrat because she wants to be in movies….period,” the musician wrote on Twitter on Aug. 9.

Taylor Swift wants to be a democrat because she wants to be in movies….period. And it looks like she will suck the door knob off Hollyweird to get there. Oldest move in the book. Good luck girl.

His comment comes following Swift’s recent interview with Vogue, where she reiterated her support for the LGBTQ community, saying, “Rights are being stripped from basically everyone who isn’t a straight white cisgender male.”

In the interview, the 29-year-old singer talked about her decision to speak out about LGBTQ rights now, saying, “I didn’t realize until recently that I could advocate for a community that I’m not a part of.”

@taylorswift is our September issue cover star! Tap the link in our bio to read the full profile. Photographed by @inezandvinoodh, styled by @tonnegood, written by @abbyaguirre, Vogue, September 2019.

She also explained how she realized she hadn’t made her stance on the matter clear enough after singer Todrick Hall asked her: “What would you do if your son was gay?”

“The fact that he had to ask me…shocked me and made me realize that I had not made my position clear enough or loud enough. If my son was gay, he’d be gay,” she said.

She went on to say, “If he was thinking that, I can’t imagine what my fans in the LGBTQ community might be thinking. It was kind of devastating to realize that I hadn’t been publicly clear about that.”

Swift then made her stance on LGBTQ rights quite clear in her music video “You Need to Calm Down,” released earlier this year, with such lyrics as: “You just need to take several seats and then try to restore the peace/And control your urges to scream about all the people you hate/’Cause shade never made anybody less gay.”

“I loved how smart it was to come at it from a religious perspective,” she said.

Swift first came onto the political scene shortly before the 2018 midterms. She took to Instagram to endorse Democrats for the Tennessee Legislature while also criticizing Marsha Blackburn, a Republican who was running for Senate.

In the Oct. 7, 2018, Instagram post, Swift wrote of Blackburn: “She believes businesses have a right to refuse service to gay couples. She also believes they should not have the right to marry. These are not MY Tennessee values.”

I’m writing this post about the upcoming midterm elections on November 6th, in which I’ll be voting in the state of Tennessee. In the past I’ve been reluctant to publicly voice my political opinions, but due to several events in my life and in the world in the past two years, I feel very differently about that now. I always have and always will cast my vote based on which candidate will protect and fight for the human rights I believe we all deserve in this country. I believe in the fight for LGBTQ rights, and that any form of discrimination based on sexual orientation or gender is WRONG. I believe that the systemic racism we still see in this country towards people of color is terrifying, sickening and prevalent. I cannot vote for someone who will not be willing to fight for dignity for ALL Americans, no matter their skin color, gender or who they love. Running for Senate in the state of Tennessee is a woman named Marsha Blackburn. As much as I have in the past and would like to continue voting for women in office, I cannot support Marsha Blackburn. Her voting record in Congress appalls and terrifies me. She voted against equal pay for women. She voted against the Reauthorization of the Violence Against Women Act, which attempts to protect women from domestic violence, stalking, and date rape. She believes businesses have a right to refuse service to gay couples. She also believes they should not have the right to marry. These are not MY Tennessee values. I will be voting for Phil Bredesen for Senate and Jim Cooper for House of Representatives. Please, please educate yourself on the candidates running in your state and vote based on who most closely represents your values. For a lot of us, we may never find a candidate or party with whom we agree 100% on every issue, but we have to vote anyway. So many intelligent, thoughtful, self-possessed people have turned 18 in the past two years and now have the right and privilege to make their vote count. But first you need to register, which is quick and easy to do. October 9th is the LAST DAY to register to vote in the state of TN. Go to vote.org and you can find all the info. Happy Voting! 🗳😃🌈

She also accused Blackburn as someone “who will not be willing to fight for dignity for ALL Americans, not matter their skin color, gender or who they love.”

She concluded her post by asking young people to register to vote. Within the first 24 hours of Swift’s Instagram post, some 65,000 new voters registered, Vote.org said in a statement to CNBC.

In her Vogue interview, which was published on Aug. 8, Swift also compared herself to Hillary Clinton, telling the magazine she didn’t endorse Clinton because President Donald Trump was “weaponizing the idea of celebrity endorsements” and claimed he would have portrayed the pair as “the two nasty women.”