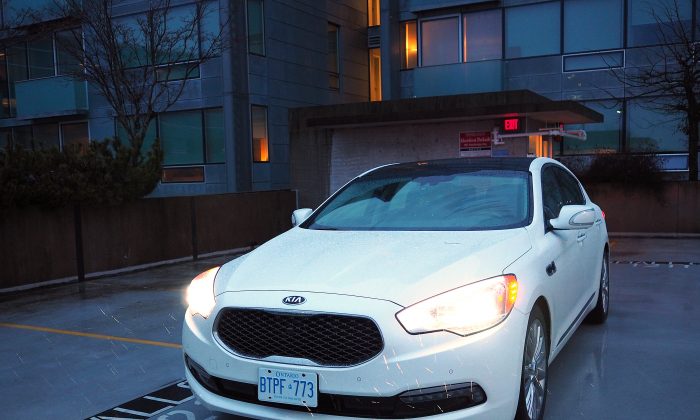 When you hear talk of redefining the rear-wheel drive uber-luxury sedan segment, Kia might not be the first brand that comes to mind. But the Seoul-based manufacturer is helping sway popular opinion with its flagship K900, entering its second year in the North American marketplace.

Through the corporate partnership of Hyundai and Kia, the K900 shares some family DNA, namely parts from the outgoing Genesis sedan and Hyundai’s own range-topping vehicle, the Equus. Its handsome looks remain unique, due in large part to the influence of Peter Schreyer, president and chief design officer of Kia Motors.

One of Schreyer’s first tasks when he came onboard was to create a powerful face for the brand, which he did with the now-famous Tiger Nose grille. Implemented across Kia’s entire portfolio of cars, the nose is especially pronounced on the K900 where it sits almost flat against the seamless curvature of the front bumper. Equally as seamless are the LED foglights stacked neatly above the LED daytime running lights, tucked away in the corners of the lower bumper opening where they dazzle when on and blend in when off.

You’ll have to stand back a bit to capture the entire side profile of the sedan in frame, because it’s long, 5,095 mm long. That might make for slightly tricky parallel parking in certain city spots, but your passengers will thank you. Why? Those in the front have 1,166 mm of legroom, and people fortunate enough to climb into the cavernous rear cabin get nearly as much, at 970 mm.

Given its almost limo-like proportions, I was surprised I had as good a time driving as my passengers did being driven around. Helming the 900-watt hi-fi stereo by Lexicon, who also provides OEM audio to Rolls-Royce, was part of the experience. I’ve listened to my fair share of premium sound systems, but the Lexicon setup really shines with a 12-channel amp in the trunk and 17 strategically placed speakers including an inverted subwoofer in the rear parcel shelf.

Speaking of the trunk, the K900 is one of the few luxury cars I’ve come across possessing a power-operated lid that opens and closes with the push of a button. A big plus, particularly in the winter so you don’t end up with a dirty hands each time you go shopping.

Standard on the Elite model I tested is Kia’s first Head-Up Display (HUD). Again, having experienced various HUDs, I’ve seen ones that work better than others. The one in this particular vehicle really is stellar. It’s full colour, adjustable, and appears to be floating in the windshield space within the driver’s line of sight without relying on any protruding panels or screens. Vitals like speed, precise turn-by-turn navigation instructions and safety alerts all appear when appropriate.

A 420 hp V8 Gasoline Direct Injection engine, another Kia first, powers the Elite. It’s obvious there’s plenty of power on tap, and when you get the rpms wound up the K900 really hauls. The throttle response seems a little laggy, like your foot moves a lot sooner before the big sedan actually moves. This sensation can be mitigated somewhat by toggling between the Eco, Normal, and Sport settings, which adjusts the shift points of the 8-speed automatic transmission and also the feel of the electric steering.

Rear-wheel drive makes the handling feel spry and the car fun to drive, but a wet day and too much gas pedal can make the tail wag ever so slightly before it’s caught by the Advanced Vehicle Safety Management encompassing technologies like the electronic stability control.

The 2015 Kia K900 Elite retails for MSRP $69,995, plus delivery and tax. Keep your wallet handy even after you’ve made the purchase. With a week of mostly city driving with small stretches on the highway, my average fuel economy was in the neighbourhood of 22.1 L/100 km.

Benjamin Yong is a freelance writer from Vancouver, B.C. and a member of the Automobile Journalists Association of Canada (AJAC). Follow him on Twitter at twitter.com/b_yong.