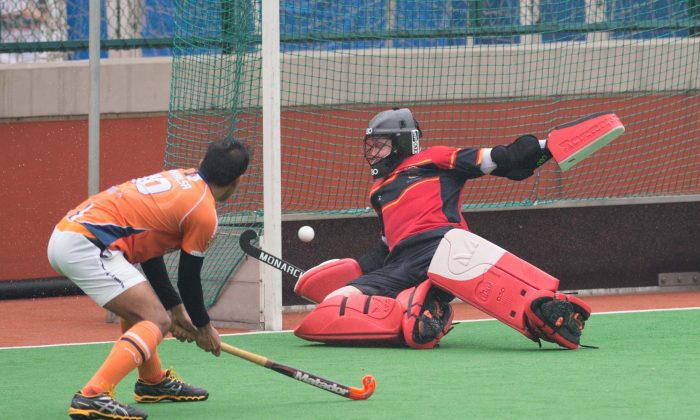 Arshad Muhammad of Khalsa tops off their score at 10:0 against HKCC in the HKHA Premier Division match at Hong Kong Football Club on Sunday March 13, 2016. (Bill Cox/Epoch Times)
HK Hockey

HONG KONG—HKCC succumbed to relentless pressure from Khalsa to go down 10-0 in their HKHA Premier match at HK Football Club on Sunday March 13, while hosts HKFC had to fight hard for their 4-1 victory against Pak-A in the later match at the same venue.

HKCC put in a strong defensive performance in the first half keeping a clean sheet for the first 20 minutes with Khalsa having much of the possession. HKCC had several forages into the Khalsa goal area but could not find the finishing touch.

Inderpal Singh opened the scoring for Khalsa after 20minutes of play by running into the circle approaching and moving round the goalie before scoring from a fine angle near the dead ball line. The second goal came soon after with a direct strike from a penalty corner by Ishtiaq Ahmed then right on half time Khalsa got a 3rd goal

Eight minutes into the second half Ishtiaq Ahmed netted the 4th with a drive past the goalie to make it 4-0, the 5th goal came from a penalty corner 3minutes later. Arshad Mohammad hit a hard drive from close range and Arif Ali scored from a penalty corner to make the score 6-0. Then there were two delightful goals by Inderpal Singh running both into the goal from the right hand side and jumping the goalie as he went for the first of the two. Arshad finished off the score-line in the last minute of the game to make it 10-0.

The HKFC match against Pak-A was fairly even for most of the game with the defence on both sides keeping control. HKFC used their brand of accurate passing to explore for openings and progress up-field. They were often thwarted by sound opposition from stalwarts such as Shafiq Mirza and Muhammad Waqas. Pak-A on the other hand used the tactics of hitting powerful long balls to their two attackers lurking near the HKFC goal. It took HKFC 17 minutes to break the deadlock with William Glover finishing off a ball hit across goal past the keeper while under close marking from Mirza.

Pak-A replied with a goal of their own though Farman Ali almost immediately to level the score. HKFC scored a second goal just before half time when Angus Allan forced the ball past a few defenders and the keeper and from the left side of the goal while Yan Adams was in perfect position to make a final touch should that have been needed, bringing the score to 2-1 at half time.

In the second half there was spectacular goalmouth action at each end of the pitch with some marvelous saves particularly by the Pakistan goalkeeper ex-Olympian Imran Shah.

But HKFC scored again after the rebound from a shot by Sander Kokke.was slotted home by Nathan Bourke and finished on the ascendancy clinching a 4th goal though Yan Adams with 3 minutes left on the clock.

Khalsa lead the standings with 48 points still with a game in hand, HKFC are second on 45points and SSSC are on 43points. All eyes will be on the next week’s match between SSSC and HKFC in the battle for the second place position.

Upcoming Matches
Matches on Sunday March 20 will be HKCC-A against KNS-A, Khalsa-A play Pak-A and HKFC-A play hosts to SSSC-A all at Hong Kong Football Club starting at 10:30am, 12:30 and 4:00pm respectively.