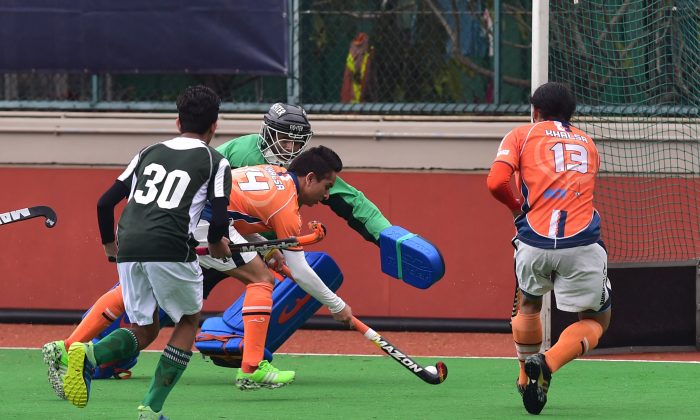 Inderpal Singh scores the first of his three goals in Khalsa’s 9-0 victory over Pak-A in the HKHA premier league at HKFC on Sunday March 20. (Bill Cox/Epoch Times)
HK Hockey

League leaders Khalsa-A completed a 9-0 demolition of Pak-A to put them on 51 points and 6 points clear of the second placed HKFC-A sufficient at that time for them to claim the HKHA premier league title at least on goal difference with one game remaining and a rearranged game also against Pak-A to play. But the result of the later game whereby SSSC-A won against HKFC-A means Khalsa cannot now be equaled.

In the earlier match HKCC-A and KNS had a good even game with Cricket Club leading 2-0 at half time through goals by Andrew Jacobs and Andre Le Claire. KNS hit back with an attacking movement 10 minutes into the second half passing the ball into the shooting area for Harjot Singh to fire past the goalie for 2-1.

Cricket Club widened the gap again from a good run by James Kenyon Brown finished off with a shot to the roof of the net by Jacobs for his brace. KNS scored again with 6 minutes to go through a goal by Jianwei Zhong for the game to finish 3-2 to HKCC.

At the start of the final Group-A game of the day between HKFC-A and SSSC-A, HKFC were lying 6points behind Khalsa, but still had the outside possibility of matching Khalsa on points if they could win their last two games.

For most of the game between the second and third placed teams HKFC and SSSC, SSSC held the advantage. The game was fast with accurate passing by both teams but the SSSC attackers seemed to have the edge. Singh Sabha (SSSC) were leading 3-2 at half time and advanced to 4-2 early in the second half but HKFC hit back late in the game securing 2 goals to put them level on 4-4, with just a minute or so left on the clock.

SSSC attacked but it was repelled by Football Club defenders, the ball was played out to the left wing and the HKFC player was in free space moving the ball upfield but still in their 23 metre zone. At which point there was a blast on the umpires whistle and a sign to indicate penalty corner, the player had apparently played the ball with the back of his stick. SSSC scored from the penalty corner to win the match 5-4.

In the final match of the season on April 3, SSSC have another tough match against Khalsa while HKFC play KNS, so the runners up position is still to play for.

Matches on Sunday April 3 will be Khalsa-A against SSSC-A, HKFC-A to KNS-A and Pak-A to HKCC-A. The first two are at Hong Kong Football Club arrangements for the third match are still awaited.