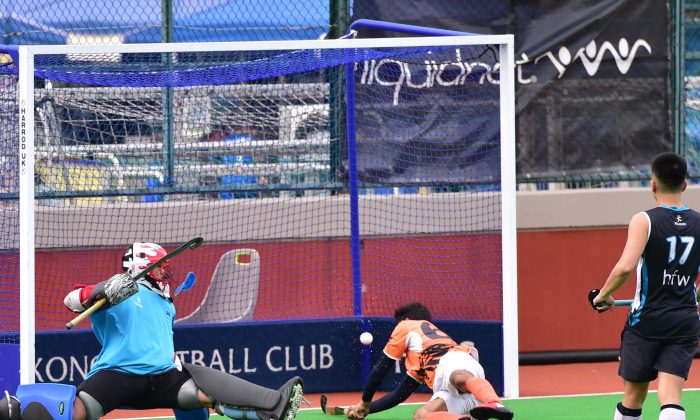 HONG KONG—Khalsa, after winning against KNS in the HKHA Premier League match last Sunday March 5 are on 41 points and have mathematically already retained the Premier title, to make it 5 wins in the last 7 years. SSSC and HKFC have each won once during that time period.

Second and third placed teams SSSC and HKFC-A played each other last weekend but the teams could not be separated finishing with a 2-2 draw. For those teams it was the worst possible result for winning the league. Khalsa are now on 41 points, SSSC are on 36 points and HKFC are on 35 points. Khalsa and HKFC both have two matches to play, Khalsa play HKFC this Sunday March 12 while SSSC have just one game left against the league leaders on March 19.

One more win by Khalsa will settle the matter decisively showing the continuing superiority of the Khalsa squad, expertly managed by Gurcharan Singh.

Match of the day last weekend was between HKFC and SSSC. There was a lot at stake.  A win for SSSC would set them up for a final confrontation against Khalsa on March 19. SSSC at best could only tie with Khalsa on points but they were within striking distance on goal difference. Had HKFC won they would have been within 4 points of Khalsa with two games left.

So the match was very competitive.  SSSC scored first with 14 minutes left of the 1st half, following an elusive run into the left side of the circle by Muhammad Bashir. He hit across goal just eluding the leg of HKFC goalie Don Ng for Amritpal Singh to deflect the ball into the net for 0-1.  A few minutes later HKFC converted a penalty corner after the first shot was blocked but the ball rebounded for HKFC’s Nicolas Riemann to push the ball home, for a 1-1 score.

HKFC’s 2nd goal was developed from a hit up the right touchline by HKFC and after an error by an SSSC defender the ball was collected by HKC’s Angus Allan and with some space took the ball into the SSSC circle and fired a hard shot to score making it 2-1. Ferocious attacks by SSSC presented opportunities but none found the net to leave the score at 2-1 to HKFC at half time.

Just after half time SSSC’s Satwinder Singh found the net but the whistle had already gone for an infringement.  HKFC survived many attacks and had a penalty corner of their own but did not convert.

SSSC continued to press, one clear chance eluded them, another strike by Satwinder flew past the post and a penalty corner was again saved. It was all action, a fascinating battle. But finally a loose ball in front of goal was claimed by Bashir to equal the score to 2-2, with 16 minutes of play left.

Frantic attacks by both sides could not penetrate the defences and the game finished 2-2.

In the only other match of the weekend Valley-A edged Pak-A 3-2 in a tight battle for 2nd place in Premier Division B. HKFC-B continue to lead the standings by 1 point although their match on March 5 against Shaheen-A was cancelled.