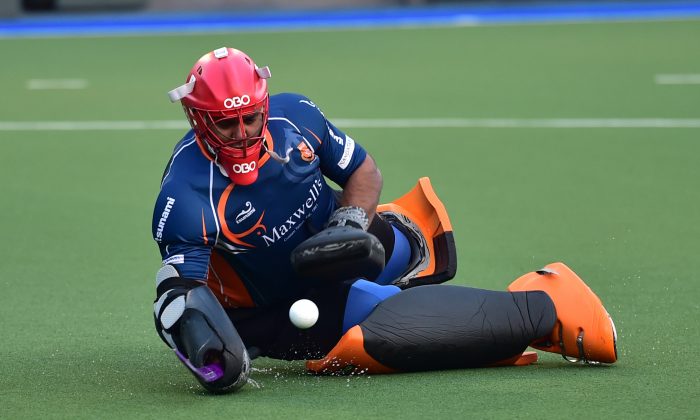 Khalsa Move into Second Place with Win against Punjab

HONG KONG—Khalsa-A won their match with Punjab-A last Sunday Dec. 14 to move into second place in the Hong Kong Hockey Association Premier Division standings and just 1-point behind leaders SSSC-A. Punjab-A have now dropped to 3rd place and are 3-points below the leaders at the half way stage of the HKFA Premier Division season.

SSSC-A maintain their top table position by beating HKFC-A 4-1 in a clean, fast moving match played at the Hong Kong Football Club. HKFC-A have faltered of late against increasingly competitive Khalsa, SSSC and Punjab sides. SSSC-A were under strength for the match as their Captain is injured, their two Malaysian players did not come as they were involved in the Cup Final in Malaysia and Muhammad Imran was on duty Captaining Pakistan in the Champions Trophy Final against German. HKFC-A was also missing their captain Kieran Smith.

Punjab vs Khalsa
In the Khalsa-A match with Punjab-A at King’s Park, Khalsa soon stamped their intention on the game by scoring in the first minute of play with a deflection so fast the Punjab goalie did not even move. Punjab, missing some top players, were not at their devastating best, but it was still a competitive, skilful, fast moving match. Khalsa also were not quite on their game as they had been the previous week against HKFC-A. But Khalsa kept attacking and succeeded in scoring a second goal after 19 minutes of play with a strike from a fine angle by Inderpal Singh after the Punjab goalie had advanced to block the attack.

Punjab pulled a goal back from a penalty corner with just 10 minutes remaining in the first half to go into the break at 1-2.

Khalsa made it 3-1 after 5 minutes of play in the second half. Punjab put in extra attacking efforts forcing several penalty corners in succession, but they could not convert these into goals. There was a period when green and yellow cards were issued by umpires Tony Cheung and Khalid Hussain mainly against Khalsa players, but Punjab could still not break through.

Other Fixtures
In the other matches KCC-A and Rhino-A drew 2-2, Valley-A beat HKCC-A 2-0, KNS defeated Pak-A 8-2 and HKFC-B lost 4-6 to Shaheen-A. Shaheen were 2-1 down at half time, but Arif Ali scored 4 goals in the second half to secure the win.

KNS-A are closing the gap on HKFC-A who have been set back by defeats by Punjab-A, Khalsa-A and now by SSSC-A in the last three matches, and Valley-A also are moving up the table and have secured a place in the Elite Group for the second half of the season and still have a game in hand to play against Rhino-A.