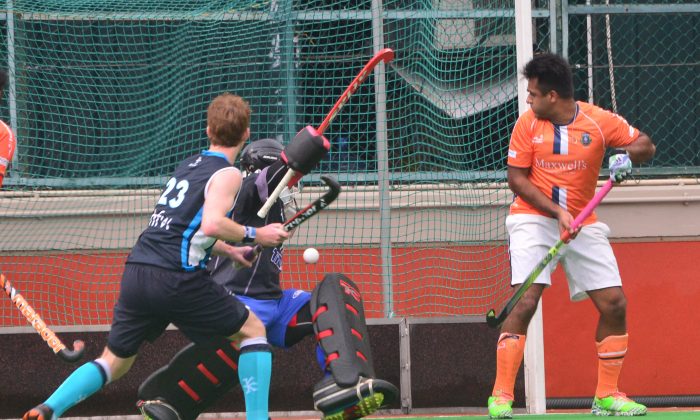 Deflector: Khalsa player/coach Arif Ali can only watch in dismay as Club reduce their 2-0 lead through a Gabriel Tsoi penalty corner, in their HK Premier Division match at HKFC on Sunday Jan 17, 2016. (Eddie So)
International

Premier Hockey—Hong Kong
By Eddie So

Khalsa-A were intent on leaving with the full three points, while Club’s aim was to halt the in-form Khalsa side, according to Club coach Koen Pijpers.

“In the first half we created a few open chances but we did not home in on them,” said Pijpers, who was not dejected despite the defeat.

“Khalsa have great skills and they took advantage and punished us for that,” he said,

Club created maximum damage as the game burst into life from the opening whistle with both sides playing at a blistering pace.

But it was the visitors who were to draw first blood with some quick-fire runs on the left from Ishtiaq Ahmed scoring twice against the run of play. Club hit back with a penalty corner goal by Gabriel Tsoi to reduce the deficit and Club nearly drew level with another attempt but the netting was disallowed.

The umpires ruled that the ball had been played before Khalsa players (defenders) had time to move five yards away so the free hit was replayed.

Then Khalsa captain, Dev Dillon nabbed a floating ball in-front of the Club goalmouth and tapped home for his side to move into a 3-1 lead going into the break.

When play restarted it was more of the same but by this time, Club had run out of ideas on how to stop Khalsa and were set back further when Khalsa scored again, this time relying on a drag flick from their Malaysian expatriate Razie Rahim, whose powerful low rise penalty corner took a deflection off Club’s goalkeeper for a 4-1 lead.

Khalsa’s Inderpal Singh added to Club’s misery when he hammered home the final nail to deny the home side any reprieve when he scored from close range.

Dillon, the Khalsa skipper while happy with the win, put it down to their relentless training during the Christmas break.

“We expected a hard game today against Club but our win is mostly thanks to the hard work and dedication of the players during the Christmas break, I suggested they take a week off, but they all wanted to train and train so they could keep themselves in top form” said Dillon.

In the other Premier A-group matches HKCC-A beat Pak-A 5-1 and SSSC-A won 9-0 against an understrength KNS.

Hong Kong Women’s National squad are back in the limelight after they finished with a bronze medal in the 2nd Asian Challenge hosted by Thailand and saw North Korea, Brunei, Cambodia and Indonesia play.

Arif Ali, the women’s national coach was ecstatic with the result saying that it has been a long time since Hong Kong has had a result at the international stage and hopes to see more results bring up the sport.

“It’s been a long time coming as Hong Kong has not done very well at the international level and what made it all that much sweeter was Tiffany Chan was voted ‘Player of the tournament’, said Ali, who added he was proud of his chargers results as for many this was their first international and with an average age of 21 there was a lot of promise for representing Hong Kong in the future.