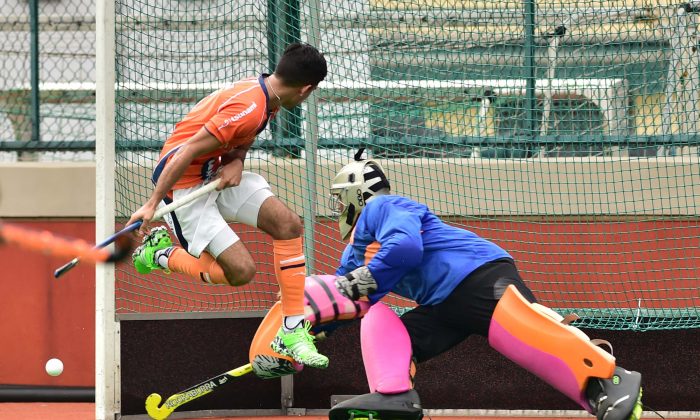 Khalsa captain Dev Dillon narrowly misses deflecting this ball towards the gaol. But SSSC keeper is well in position to defend in their final Premier division match of the 2015-16 season at HKFC on Sunday April 3. (Bill Cox/Epoch Times)
HK Hockey

HONG KONG—League leaders Khalsa-A completed a 5-3 win against Singh Sabha Sporting Club (SSSC-A) at Sports Road on Sunday April 3 to lift the HKHA Premier Division Cup with 54 points, 6 points ahead of the second placed team HKFC. Khalsa still have a delayed match to play against Pak-A scheduled for April 12, 2016.

In Sunday’s match, SSSC were well up to the task, with scoring in the first period going in their favour in a fast moving well contested match.  SSSC kept one step during the first half to go into the break with a 2-1 lead. Khalsa equalized just 5 minutes into the second half.

The scores stayed level with narrow misses at each end but the deadlock was broken with 11 minutes left on the clock with Khalsa scoring high in the net from a penalty corner. This followed a delay due to a debilitating knee injury to SSSC’s Amandeep Singh. SSSC immediately had to face another penalty corner from which Khalsa increased their lead to 4-2 with a shot this time along the ground.

With 4 minutes to go SSSC converted another goal to narrow the gap to 4-3 but 2 minutes later Khalsa netted a runaway goal as SSSC pushed for the equalizer, leaving the final score 5-3 to the champions.

Khalsa manager Gurcharan Singh is pleased with maintaining their dominant position in Hong Kong Hockey (as are the many supporters of Khalsa) and summed up the team’s 2015-16 effort:

“The boys take out their hearts to play and win this league and they have been training regularly twice a week, they really deserve this and all credit goes to the coach, to the sponsors and the Khalsa family.

“Singh Sabha played well today, consistency was there, they were focused on the game and they took out their hearts to win this game – it was a good game” he said.

In the earlier match on the same pitch HKFC-A played KNS-A dominating play with fast passing moves to penetrate the KNS defence. HKFC finished the match at 8-0 to move them back into second place as divisional runners up above SSSC-A.

The focus now moves to the Holland Cup knockout competition. Preliminary matches were played last weekend at King’s Park: HKU-A vs KCC-A (0-12), Shaheen-A vs HKFC-B (4-1) and HKCC-A vs Valley-A (2-4). KCC, Shaheen and Valley move forward to play in the first round of the main competition at King’s Park on Sunday April 24.