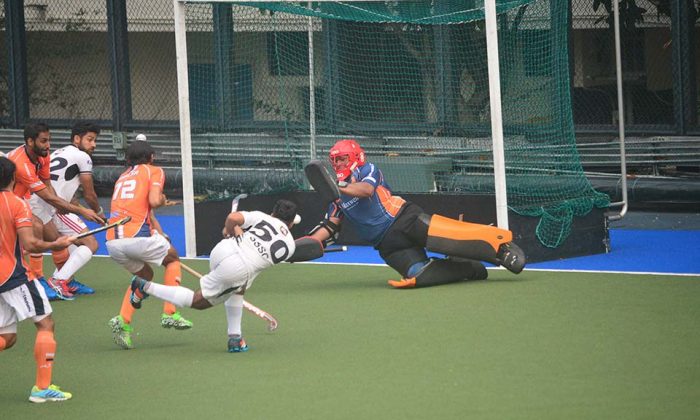 SSSC-A pressure the Khalsa-A goal during the Holland Cup final at King's Park on Sunday May 14, 2017. (Eddie So)
HK Hockey

Khalsa End Season On A High

HONG KONG—Premier League Champions Khalsa-A added the season ending Holland Cup to their trophy mantle making for a league double within the space of three seasons.

In accomplishing their league double, they managed to enact revenge on Singh Sabha Sports Club-A, the side that beat them to the same trophy last season. This time around it was a fantastic display as the match kept all hockey fans on their toes. The match was played at a blistering pace which ended in a 7-5 victory much to the delight of the many assembled Khalsa-A fans making for a full house at King’s Park last Sunday, May 14.

The win was all the sweeter as it made for six titles for Khalsa-A which began with the season opener Challenge Cup. Club manager Gurcharan Singh was ecstatic as Khalsa’s Under-16 side lifted the Youth Cup for the season, beating Antlers 3-0 a week earlier.

There was more good news for Khalsa, when their B team lifted the Hong Kong Hockey Association Cup in the morning with a 4-1 win over Hong Kong Football Club-C.

So it came as no surprised for Singh to praise his club for having their most successful season to-date and paid homage to their patron Buta Singh who passed away at the start of the season but had helped them over the years.

“It was one for the most closely contested derby match I have seen this year,” said Singh.

But try explaining that to the SSSC-A side that saw the Khalsa-A side’s two deadly scorers – Gazzie Singh and Inderpal Singh net a hat-tricks apiece before Sukajeet Singh killed any hopes of their opponents coming back despite goals from Aleem Bilac, a pair from Arshad and one goal each from Amba and Himanshu.

The game seesawed from end to end as both sides attacked and defended at the same time, neither conceding any space nor allowing either side any leeway.

Even SSSC-A manager Johnny Singh was equally flabbergasted but expected his side was going to have an uphill battle as they had lost their key midfielder Mani Singh after he collected two yellow cards from last week’s semi-final making him ineligible for the final.

“Yes, we had a tough game today and we expected that, not only was Mani (another midfielder) not available but we couldn’t get another player (Parry) back on time. So it was hard luck on our part, plus we had to rely on  our young goal keeper but I won’t blame him as he did his very best and I think the experience will do him good,,” Singh said.

In the women’s Holland Cup, Premier Women’s league champions Hong Kong Football Club-A took on their B-side in the final at King’s Park on Sunday May 14. But the match was not the walk in the park victory expected as the ‘B’ side pushed them all of the way. HKFC-A eventually took the winner’s trophy, compliments of midfielder Olivia Chiu’s low, yet powerfully driven shot to break her club-mate’s hearts.

The match was really exciting and B’s goal-tender KC Cosentino, had a brilliant day in keeping their A-Team at bay until Chiu’s winner.

Eddie So is a seasoned sports journalist and photographer and has worked for a number of media companies in Hong Kong over a period of more than 20  years.