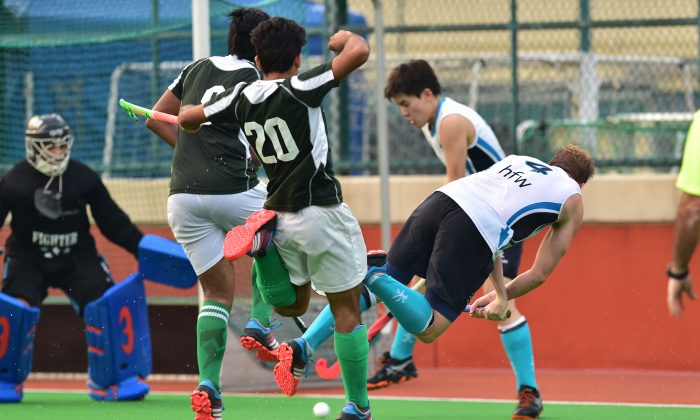 Will Glover of HKFC-A forces a way through the Pak-A defense to score goal number 3 in their 5-0 win at in the HKHA Premier Division Sports Road on Sunday Nov 29, 2015. (Bill Cox/Epoch Times)
International

Field Hockey—Hong Kong
By Eddie So

HONG KONG—Khalsa-A made it nine out of nine as they stretched their unbeaten run to lead the standings in the men’s Premier Field Hockey League when they outclassed Valley-A at King’s Park on Sunday with a 9-0 result.

However, the results was a hard-fought affair and Khalsa had to literally earn every goal despite the 9-0 score-line as Valley played some outstanding hockey of their own rewarding them with some excellent counter runs.

The victory set in motion a good base for next Sunday’s highly anticipated match between Khalsa-A and second placed Singh Sabha Sports Club-A which should confirm the lead team going into the Christmas holiday break.

Mark Kake, Valley coach accepted the fact that they were beaten by a better side but that in some ways it was a good lesson for his team as they rebuild after losing some players to overseas jobs or leaving Hong Kong for good.

“We were not overawed by them and we kept going all out to have a go at them but when you are reduced to one sub through injury and playing this kind of game at this high level, it takes a bit out of you and when you are playing against the big spending clubs what do you expect?” said Kake, who was unavailable as a player as he, as a coach, recovers from a motorcycle accident after breaking his left ankle.

“Khalsa are a good side but if I were Khalsa and spending that kind of money for a 9-0 result, I’m sure they were not happy with it [the result] but they should go all the way and win the championship,” he said.

Kake felt that while Khalsa had scored some good goals he was left fuming as a few were his defenses own undoing but on another note, he was happy with his charges as he felt they played against a good caliber side and he felt they did extremely well and that it showed promise for the future.

Khalsa skipper Dev Dillon was visibly pleased with his team’s result although they seemed to play it cautiously in the second half as they spread the ball around to eventually break down Valley’s resilience.

“Its going to be a long season and of course we have to be cautious,” said Dillon, especially as he pointed out the Hong Kong Hockey Association were using a points demerit system based on cards served, put in placed to control discipline.

“We’ve already received two yellow cards from our last game and we cannot afford to have players suspended this early in the season as it might prove costly if we want the Premiership title,” he said.

Khalsa started off slowly and it took them 12 minutes before getting their name on the score-sheet off an Arif Ali rebounded penalty corner and then they extended through a Palvinder Singh reverse sick shot high into the Valley net for a 2-0 lead.

Towards the break Khalsa added a third and fourth goal, the first off an Arshad Mohammad penalty corner and then off a Ishtar Ahmad stroke converting going into the break 4-0 up.

Khalsa did not let off the pedal as they continued their raids with Ahmad bagging the other stroke while Barkat Singh went onto score a hat-trick through three second half goals.

Dillion was especially excited and looking forward to next week’s encounter with Singh Sabah Sports Club-A, who kept themselves in touch with Khalsa as they closed down the gap between the two sides to two points after SSSC-A beat bottom-placed Hong Kong University-A 14-2 over at King’s Park.

Hong Kong Football Club’s two sides have sustained topsy-turvy results with their A-team but come away on a 5-0 whitewash over Pakistan-A in this match whereas HKFC-B lost to Hong Kong Cricket-A 2- 5.

The result leaves Football Club-A in third place and keeping in touch with league leaders Khalsa and second-placed SSSC-A as the season winds down before the Christmas holiday break.

Over at King’s Park, Shaheen-A and Kowloon Cricket Club-A entertained the small crowd assembled as they battled in a see-saw nail-biter before Shaheen left with the full three points on a 5-4 leaving both sides still in eighth and 10th place respectively.