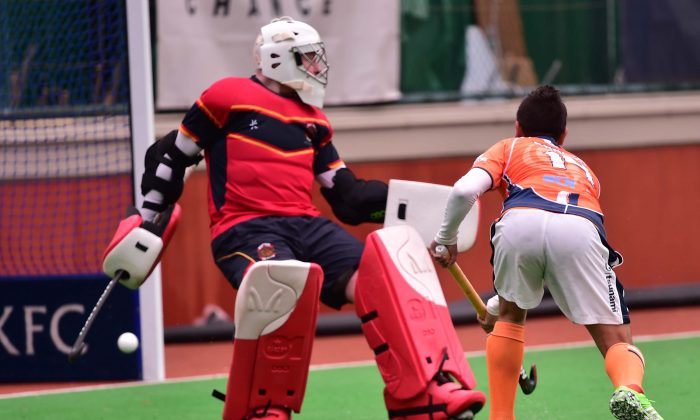 HONG KONG—The HKHA Premier League continued last weekend with Division A matches between Khalsa and HKCC, and SSSC against KNS. HKFC-A had a bye last week.

SSSC-A secured a straight forward 9-3 victory over KNS-A taking them onto 35 points and 2nd in the table leapfrogging HKFC-A on 34 points.

At Football Club, mighty Khalsa-A took on bottom of the table HKCC-A but it was not all easy sailing for Khalsa as the sturdy defence of HKCC broke down most of the Khalsa attacks with firm resolve. HKCC made a few pushes into Khalsa territory and some of the attacks looked promising but few resulted in shots on goal. The Khalsa defence was quick and decisive and cut out danger before it could advance into the danger zone.

At the other end Khalsa plugged away, and although not finding it easy, did have successes. On 9 minute Inderpal Singh scored by deflecting a hard-hit shot into the circle. Two mintes later he scored again this time with some deft play in front of goal.

But Khalsa had to wait until 5 minutes before half time for their 3rd goal: Inderpal was instrumental in this goal also, he took the ball to within a couple of metres of the goal then passed it right for livewire Sukhjeet Singh to slot the ball behind the HKCC goalie and into the net. Khalsa had a penalty corner opportunity just before half time but this was well pushed round the post.

Khalsa secured a 4th goal early in the second half and added a 5th after 23 minutes of 2nd half play. HKCC made a few advances late in the match but could not find the net. The final score was 5-0 to take Khalsa onto 38 points.

In Division B matches, the game at Football Club between HKFC-B and Valley-A was a well-balanced and well contested match ending in a narrow 4-3 victory for the home side. At King’s Park the match between KCC-A and Shaheen-A finished all square at 1-1.

Last weekend’s matches again demonstrated the benefit of splitting the Premier Division into A and B sub-divisions, as all matches resulted in competitive games

With just 3 rounds to play in the Premier league, the top 3 teams have still to play each other, so anything could happen – but would anyone back against Khalsa?. The crucial game is probably Khalsa against SSSC on the last day of the league, on March 19.

Khalsa lead Premier A with 38 points, SSSC-A have 35 points and HKFC-A have 34 points (with a game in hand over SSSC), HKFC-B are now top of Division B with 18 points, Pak-A are second with 17 points (game in hand) and Valley-A are 3rd on 14 points.