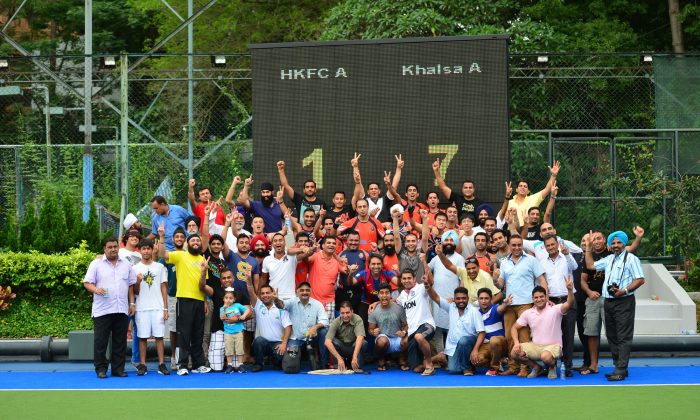 Khalsa players, officials and fans celebrate Khalsa's win in the 2013-14 Holland Cup at King's Park on Sunday May 11. (Eddie So)
International

Hockey—Holland Cup
By Eddie So

Khalsa-A ended their season on a high when they rewrote their club’s history books after completing a unique treble, compliments of the Holland Cup at the newly refurbished King’s Park field-hockey Stadium on Sunday May 11.

The victory, however, was an embarrassing 7-1 defeat for early tournament favourites Hong Kong Football Club-A (HKFC-A) that were expected to give Khalsa a good run in the final. The Club side, short of five regular players, proved to be no match for Khalsa as they entered the break trailing 3-1 despite taking an early lead through Yan Adams five minutes into play.

The match started with one minute silence in respect for Khalsa first-choice goalie who had returned to India because of his wife’s death through cancer.

Khalsa coach Harry Bal Singh said his players were sad for their goalkeeper and that the club would hold off any post match celebrations as a sign of respect to their team-mate.

Bal said the victory over Club was “icing on the cake” for Khalsa after a long and hard season against some good sides making their title trip all the harder this year. He hopes his charges can continue their run for many years to come.

“The last few seasons have seen us gradually improve when we won the double—in the league and one of the cups (either the Guru Nanak or Holland Cup) but not all three in one season,” explained Bal.

“This is a first for Khalsa and hopefully not the last,” said a beaming and overjoyed Bal.

Club’s charismatic skipper, Kieran Smith was at a loss for words as he saw his side literally crumble from late in the first half. Khalsa’s juggernaut in attack through the trio of Egyptian Ahmed Ewis, Arshad Mohammad and Inderpal Singh created the space for others to score almost at will.

Especially dangerous was forward Dev Dillon, who created havoc on the right as he went on to score a brace. Inderpal Singh netted twice and Harpal Singh also got in on the act scoring the 6th goal in the 7-1 goal-fest.

Since taking over the club’s coaching duties as player/coach, Bal, has had a phenomenal run and has done amazingly well for the club.

What makes the treble all the sweeter, was in winning the Premier League title, they did it without conceding a defeat during the entire season. This Cup win capped it all nicely, especially in front of their die-hard Khalsa fans, who just kept roaring their side on, whenever Khalsa launched a raid on Club’s goal.

HKFC’s skipper, Kiran Smith was devastated by the defeat as his side had looked to the Holland Cup as their only silverware and redemption from a dismal season.

“I have to congratulate Khalsa, they were competitive and continued to play competitively so it made it interesting for those who came here to watch,” he said.

“We will hopefully have a bigger squad next season, but you know how it is as many players are always away on business and it’s hard to keep a stable side consistently,” Smith said.

Despite the lack of manpower, Club took the lead through Yan Adams within five minutes of play before Khalsa levelled through Arshad Mohammad just before the break.

With the final whistle, the pitch was inundated with Khalsa fans eager to shake their heroes hands. Many fans sang: “We are the Champions,” as they watched the Khalsa players and officials go up to the podium to collect their winner’s medals.