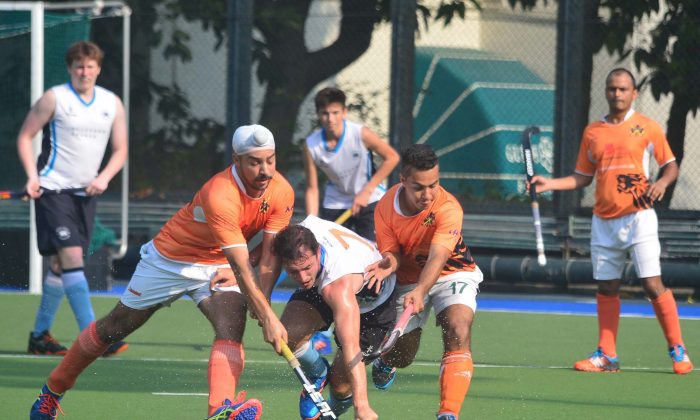 Hustle: SSSC players sandwich a HKFC defender on their way to another raid in the Holland Cup Semi-final at King’s Park on Sunday April 30, 2017. SSSC won the encounter 6-2 to move forward to meet Khalsa in the final. (Eddie So)
HK Hockey

HONG KONG—Recently crowned Premier League champions Khalsa-A are in an enviable position as they look to add the season ending, pretentious and historic Holland Cup, knock-out title to their trophy mantle. Khalsa booked their finals’ berth with a 9-1 demolition over a young and spirited Shaheen-A outfit at King’s Park on Sunday May 30.

Shaheen-A playing without their talismanic goal-scorer Asghar Ali, out recovering from a groin injury and the club replaced him with his younger sibling Asif to hold the fort in midfield.

Add a host of minor injuries and the unavailability of a few players due to work commitments plus illness to regular keeper Rex Chan (running a high fever), B-team tender Ahtshan, was called up to replace him.

“It turned out to be a good outing for the boys today, although the score was a bit lopsided but that is how it goes,” said Asif, who at 40, still looked fresh and did not seemed to be struggling in his usual dominating midfield game, a position he has held for both club and Hong Kong.

Sunday’s result stopped Shaheen-A from closing the gap with local rivals Nav Bharat-A’s Holland Cup record for the unforeseeable future.  Shaheen have won 12 titles, but still two less to NBC’s record of 14 wins while Khalsa-A have won three and if they can edge out SSSC-A, will make it four.

Even Shaheen’s rivals of the day were apologetic for defeating the side as they lacked the guns they normally have available.

Defending Holland Cup champions Singh Sabha Sports Club-A, winners of the other semi-final, were playing without their regular center forward but as club manager Jasbir Singh said, after their victory, they hope Parry can return before the final but their efforts will not be severely hampered as they know how their opposite numbers play.

But Khalsa coach Malkit Singh Pannu said “The pressure is on them[SSSC]”, as lifting the Premiership was the main trophy for Khalsa but he felt by winning the double it would be a fitting end to the season after the death of their patron Buta Singh at the beginning of the year.

“I am sure if we were to win the Holland Cup it would be nice for Buta and his family as it would be a fitting double tribute for all involved,” he said.

SSSC-A, true to form, might be chomping at the bit following their 6-2 victory over Hong Kong Football Club-A, in an action packed game that saw both sides clamoring for a chance at goal, but in the end it was the defending champions to hold sway.

HKFC-A coach Koen Pijpers was hoping his side would have a fighting chance against SSSC but with the departure of some key players and the promotion of others from lower divisions, he knew their game would be an uphill task. On getting the score back to 2-3 he was optimistic but after an error and the game slipped to 2-4 he knew it was going to be difficult.

SSSC manager said “We were missing centre forward Parry who had to go back to India urgently”. He said they were fighting against the clock to get him back in time for the final.

As to the game, despite the victory, Singh felt they had lost some of the momentum in their offensive play and he blamed this on some players moving to new positions but if Parry can return on time, he is confident they will hold their own.

Hockey fans are advised to try to arrive at the stadium nice and early with their picnic baskets for what is sure to be an entertaining day of hockey and with the main event being Khalsa-A versus SSSC-A, as delay might leave one desperately looking for a seat.