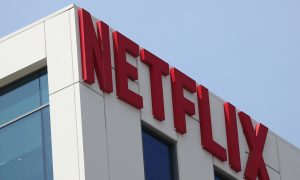 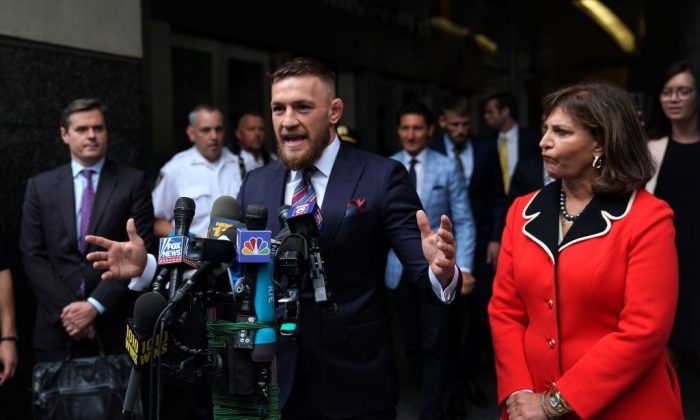 Conor McGregor talks to the press on July 26, 2018, in New York, after he pleaded guilty to a single violation of disorderly conduct after attacking a bus filled with UFC fighters. (Timothy A. Clary/AFP/Getty Images)
Entertainment News

Khabib Nurmagomedov said he believes the UFC staged Conor McGregor’s attack on his bus that eventually led to the two mixed martial arts fighters facing off in a Las Vegas arena on Oct. 6.

McGregor and several associates attacked a bus carrying UFC fighters back in April, an incident that landed him in court in New York, and sparked a controversial buildup to their UFC 229 clash.

Khabib “The Eagle” Nurmagomedov clinched a fourth-round submission win against Conor “The Notorious” McGregor to retain his UFC lightweight title before sparking an all-in ringside brawl after scaling the cage and attacking Dillon Danis, a member of McGregor’s entourage.

The Dagestani fighter has now revealed he has a “lot of questions” about the infamous bus incident that sparked the bitter feud between the two fighters.

“Let me tell you how that all played out. I had a team of about 20 men. We had a bus just like that, hired (for us) to go to the gym, press conferences all the media activities and so on,” he told RT.

“But you know what’s interesting–on that day the UFC told me that on that media day I had to arrive alone. So I was traveling with all the other fighters who would fight from the red corner. I was in the red corner as well as a favorite. With me there was only one person (from my team) and my manager.

“And if you watch the footage, you can see that the bus almost gets to the gate, and then suddenly it stops and pull back. Why? If you see that some people are attacking the bus, then you should keep moving and get outside (from the parking lot). But then you stop and pull back. Why? For me there are a lot of questions. I don’t know whether the UFC made it all on purpose or not,” he said.

“But they started to attack (the bus), break (windows). It was a crowd of around 20 men. Inside (the bus) we had three security guards. And as you can see (in the video), there were security guards outside as well, trying to stop Conor. In my opinion, I give 70 percent that it was a set-up,” he added.

“I wanted to get outside, and all the fighters who were in the bus, already confirmed it in their interviews, as well as all the managers. It all happened in about one or two minutes. I don’t know, but this incident leaves a lot of questions for me,” Nurmagomedov  said.

Meanwhile, Floyd Mayweather has responded to Khabib’s challenge to fight him—and it seems the undefeated boxer is interested in stepping into the ring with the expert grappler.

“Let’s go Floyd,” Nurmagomedov said previously, according to reports. “We have to fight now, 51-0 vs 27-0, two guys who have never lost. Because in the jungle there is only one king. Of course I am the king because he cannot drop McGregor but I dropped him easily.”

Mayweather appeared to accept the challenge, as he posted a message on Instagram calling for companies to book the fight.

“CBS, Showtime and MGM Grand get the checkbook out!” Mayweather wrote. “Go to @leonardellerbe ‘s page to view Khabib Nurmagomedov challenging me.

In reply to Floyd Mayweather, the Express reported that Nurmagomedov said “But no Vegas, they won’t pay my money.”

Nurmagomedov is still waiting for his purse from the UFC 299, which was withheld pending the ongoing investigation into the post-fight riot.

One man who doesn’t think it’s a good idea for the Dagestani grappler to step into the boxing arena against one of the world’s best strikers is two-category UFC champion Daniel Cormier. He said his friend and training partner would get a thrashing at the hands of the legendary boxer.

Nurmagomedov and McGregor are both temporarily suspended from the UFC for their roles in the post-fight fracas, as the Nevada State Athletics Commission mulls whether to impose further penalties.