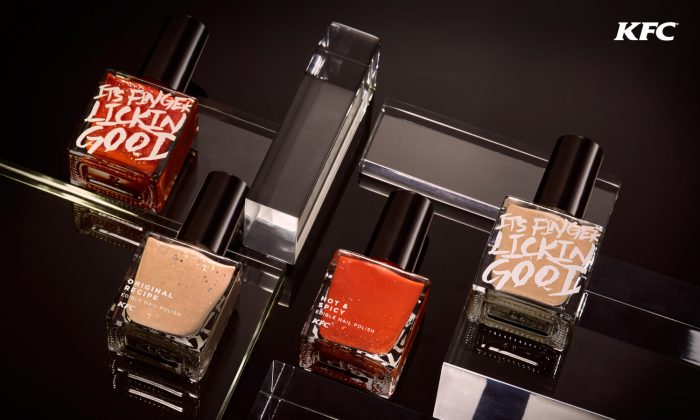 According to its press release that Racked published in full, KFC Hong Kong thought up the “innovative” idea to keep “the brand literally at their customers’ fingertips.”

The nail polish comes in two flavors—or hues; the cream colored “Original Recipe” and the reddish “Hot & Spicy” have been developed in honor of the fast food restaurant’s much beloved fried chicken flavors.

Speaking to The New York Times, Anna Mugglestone, marketing and communications director for Ogilvy & Mather in Hong Kong, said “I tried it myself in the office when they were doing testing.”

A partner at the agency and creative director for the campaign, John Koay said food specialists at the spice company McCormick & Company manufactured the nail polish.

Created from natural ingredients, the edible nail polish has no preservatives and thus has a short shelf life, said Koay.

As a part of the campaign, Ogilvy & Mather made a music video.”If you look at the likes of Dior, Louis Vuitton, and Gucci” said Koay, “they usually release something that is quite … an abstract kind of film.”

The two protagonists of the short video are meant to represent the two nail polish flavors. Which is which?

Koay mused “I guess it was a storytelling of a duel between those two to see which flavor was better.”

Hong Kong consumers who purchase the limited edition nail polish—”packaged in a stylish glass bottle and minimal box with over gloss details to appeal to young consumers’ love of food and fashion”—will be able to vote on their favorite flavor.

Elaine Li, an art director at Ogilvy & Mather Hong Kong hinted that the winner will be released for mass production.

What do you think? Want to pop over to Hong Kong for a tasty mani-pedi?