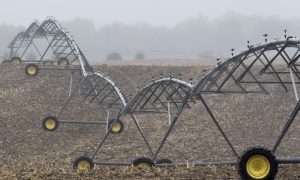 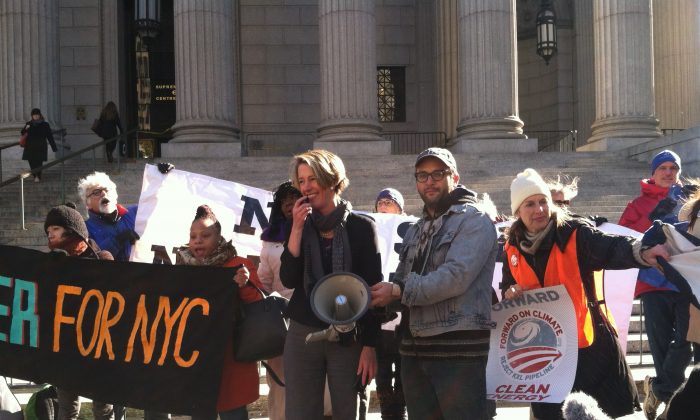 Former New York gubernatorial candidate Zephyr Teachout (L) and filmmaker Josh Fox at a rally protesting the Keystone XL Pipeline in downtown Manhattan, New York on Tuesday, Nov. 18, 2014. On Tuesday evening, the U.S. Senate was expected to vote on whether to approve the next phase of the pipeline's construction, which will bring crude oil from Canadian tar sands to refineries along the U.S. Gulf Coast. (Annie Wu/Epoch Times)
New York

NEW YORK—Ahead of a U.S. Senate vote on the construction of the Keystone XL oil pipeline, a group of local environmental activists rallied in downtown Manhattan on Tuesday to call for an end to the project.

If completed, the pipeline can transport up to 830,000 barrels of oil per day. Opponents of the pipeline are concerned about the greenhouse gas emissions that would result from increased oil production.

On Tuesday, former gubernatorial candidate Zephyr Teachout was the opening speaker at a rally in Foley Square near City Hall, where she called on governor Andrew Cuomo to take a clear stance on whether he supports the pipeline project.

“It may not be proposed to go through New York State or New York City, but the effects of it will be felt here,” said Teachout, noting that the effects of increased oil production will impact the environment and have repercussions for everyone.

While New York senators Chuck Schumer and Kirsten Gillibrand have expressed that they will vote against the pipeline, Teachout said they haven’t done enough. She urged the two senators to pressure President Barack Obama to “never grant authorization” for the project.

As of Tuesday afternoon, it seemed unlikely that the Senate would get the 60 votes needed to guarantee passage of the bill designed to green light the project.

Myrtle E. Williams, who works at a nursing home in the Rockaways, recalled having to evacuate over 140 residents when a blizzard hit the city shortly after Superstorm Sandy. When they returned to the nursing home, there was still no heat or hot water.

Some elderly residents passed away during the ordeal. “When you work in the healthcare field, your residents become your family. And to see them die because of things we could’ve made a change in is, very, very sad and very disheartening,” she said. Williams expressed that a disastrous storm like Sandy could hit again if not enough is done to stop climate change.

Similarly, Alexis Smallwood was displaced from her Rockaways home after the storm, and lived in the Bronx for a year and six months. After Smallwood returned to the neighborhood, a natural gas pipeline got the go-ahead to begin construction. The Rockaway Lateral pipeline brings fracked natural gas through the Gateway National Recreation Area, a federal park, to distribution lines in Flatbush, Brooklyn.

“Every time that drill hits the ground, I can feel the vibrations, and Mother Earth saying, stop. This is not for me,” said Smallwood, who is a community outreach coordinator with Rockaway Wildfire, a community organization that advocates for responsible redevelopment of the Rockaways.

The rally was organized by local advocates from 350.org, the group behind the People’s Climate March in September that drew hundreds of thousands of protestors.