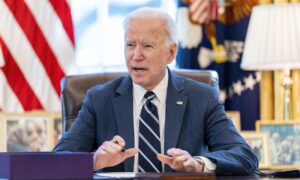 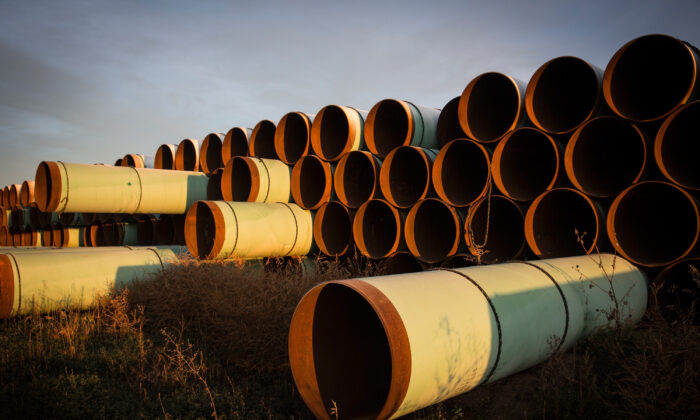 Miles of unused pipe, prepared for the proposed Keystone XL pipeline, in a lot outside Gascoyne, N.D., on Oct. 14, 2014. (Andrew Burton/Getty Images)
US News

Keystone XL Pipeline Developer Seeks $15 Billion in Damages From US

In a statement on July 2, the Canada-based company said it had filed a notice of intent with the State Department to begin a legacy North American Free Trade Agreement (NAFTA) claim under the U.S.–Mexico–Canada Agreement.

The company said it aims to “recover economic damages resulting from the revocation of the Keystone XL Project’s Presidential Permit,” adding that it suffered a loss of more than $15 billion “as a result of the U.S. Government’s breach of its NAFTA obligations.”

Biden signed an executive order on his first day in office that halted the Keystone Pipeline project, saying the move was part of his administration’s larger agenda to tackle a projected climate crisis.

Subsequently, TC Energy on June 9 officially pulled out of the project, which was first proposed in 2008 and would carry hundreds of thousands of barrels of oil per day from Canada into the United States.

While Biden’s decision was hailed by his supporters and many environmentalists, most Republicans and industry groups criticized his executive order blocking the pipeline. Critics have said that tens of thousands of jobs were lost essentially overnight by the pipeline’s cancellation. After Biden revoked the pipeline’s permit, the energy company said it would “directly lead to the layoff of thousands of union workers.”

While asserting that the Keystone project “would not serve the U.S. national interest,” Biden said that his Jan. 20 order is designed to “promote and protect our public health and the environment, and conserve our national treasures and monuments, places that secure our national memory.”

The pipeline was slated to carry 830,000 barrels of oil per day from the Alberta oil sands to Nebraska. It had been delayed for over a decade amid opposition from many environmentalists, Native Americans, and some landowners.

Bloomberg reported in February that Biden’s decision to ban the pipeline has sparked renewed interest in transporting Canada’s oil-sands crude to U.S. refineries by more-carbon-intensive rail, as supplies from Mexico and Venezuela decline. Data show that Canada has been exporting an average of 129,727 barrels of oil per day by rail for the month of April as the industry continues to discuss alternatives to address the demise of the Keystone XL project.

Alberta Premier Jason Kenney said in a statement on June 9 that he remains “disappointed and frustrated with the circumstances surrounding the Keystone XL project, including the cancellation of the presidential permit for the pipeline’s border crossing.”

Reports say the province had invested roughly $1.1 billion in the pipeline, which means it’ll now have to take a loss on the project.

In May, 19 Republican-led states, led by Montana Attorney General Austin Knudsen, called on the president (pdf) to reinstate the pipeline.